Recently, interestingly while washing the dishes, I had some interesting photo project ideas. They are called Traces, In The Still of The Night, Arenas and Rain. So here they are, my New Year’s Photo Resolutions.

“Traces” is about finding traces of things that just happened in everyday life. Nothing special, just very profane things. In a severe attack of spontaneous inspiration I snapped the remains of grating cheese on a bread board and called the image “Pizza”. Bubbles, dish cloth and washing-up brush in a kitchen sink ended up in an image called “Chores”. An old photo of my son on the kitchen pin board along with some other snippets and notes became the ingredients of an image called “Childhood”. It should have become clear by now that in this project the title is as important as the photo itself. 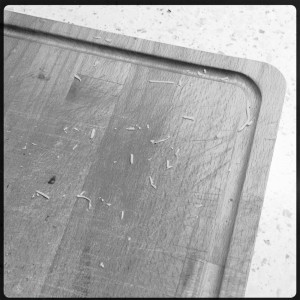 I find this project pretty exciting for several reasons:

Furthermore, I plan to shoot all the shots with my iPhone using the Hipstamatic app. I hope that the gritty vintage look of the images created with this app supports the aspects mentioned above. I guess it’s all about the notion of evanescence (and how we deal with it). Tomorrow’s memories today, as I have recently written in conversation on Google+.

In The Still of The Night

The project “In The Still of The Night” probably will be “mood photography”, as I call it. I have no idea whether this genre really exists but, who cares? The idea is to capture the typical mood of the night in the city. I am talking about the really deep night here from 1-4 AM. Darkness, emptiness, every now and then a car or a person passing by, maybe sometimes a lonely light in a window. Perhaps there is a party going on somewhere that can be seen through a window. A people smoking outside. All these can be the visual elements of the images. But they are not what I want to show in the first place. They are all but means to an end and that is to convey the mood and the feeling of being there. This is pretty vague and I guess it pretty hard to bring the atmosphere across just with photos. Therefore, it might be a good project a multimedia twist and record the sounds of the night so that I can use them as a kind of soundtrack while presenting the images in a slide show. These sounds can be steps, wind, rain, voices and laughter, and so on. It remains to be seen if there is an opportunity for telling a story with several images.
I think this is a difficult project. Not only because it means getting up when really all I want to do sleep, but also because walking alone in the city with lots of expensive photo gear is not the most harmless thing to do.

The project “Arenas” is about architectural photography. To be more precise, I intend to show the football arenas of the Ruhr area from every angle imaginable. Closeup shots as well as totals, but always in interestingly light. Very often these stadiums have their own lighting so this might not be too difficult to achieve, especially at night. For some reasons, don’t want to have people in the shots. It’s all about about architecture in my mind.

Finally the project “Rain”. The mix of rain and darkness offers many photo opportunities. Rain in the headlight of the cars, umbrellas in front brightly lit shop windows, people rushing by and much more. To protect my camera and lens I’ll experiment with a self-made freezer bag rain cover as shown in the book “Michael Freeman’s Top Digital Photography Tips” by, well, Michael Freeman.

… and all the others

Of course, there are still are still some old projects that I intend to keep pursuing. Animals will remain my main field of interest and many people on the web say that black & white animal portraits have become some kind of trademark for me. Even I, the great grandmaster of self-doubt, cannot deny that I have built myself a reputation with these photos. I plan to keep working in this field. I have already mastered the biggest obstacle: My treasury secretary has already granted another annual ticket for my local.
Next, I plan to walk up a certain heap near my home town. I have been there once last year and got a bunch of exciting photographs that now are the beginning of my Silhouettes gallery. I intend to get more shots like this. All I have to do is wait for interesting clouds in the sky and people who do interesting things up there.

Oh yeah… loosing some weight would be nice, too

Now all that’s left for me to do is make sure that these New Year’s Resolutions don’t end like all the other resolutions that are made each year. Fortunately, I am not saying that any of these projects above will produce high quality art. They are all about fun. That should take much of the pressure away that often comes with such resolutions. I am not obliged to finish any of these projects at any given point. Well, except maybe that weight loss thing…