The so-called Sorcerer’s Apprentice is an art installation in the city of Oberhausen, created by the Inges Idee, a German artist collective from Berlin. It was their submission to the international art exhibition Emscherkunst in 2013. The installation is based on the structure of a traditional power pylon but with curved parts resulting in the look of a dancing power pylon. It goes without saying that the Sorcerer’s Apprentice (or the Dancing Pylon as many people call it) has become a landmark of the Ruhr Valley in no time. However, the installation had to be dismantled in 2018 due to some constructional flaws. Since then, it has been replaced with an upgraded version of the same shape and size.

I have been trying to photograph this installation for quite a while now, but all the time it was hidden behind extensive scaffolding due to the reconstruction. Last week, however, the scaffolding was gone, so I tried my luck. And I found this scene.

As you can see, the fence around and the heap of earth behind the installation were still ruining the scene but having waited for months now I was not willing to pack my stuff and leave without a shot. So I went closer to the installation to photograph it upwards from a low angle thus excluding the fence from the frame.

From a low angle.

After seeing this image, I decided to go for a long exposure because I thought that the abstract and minimalistic nature of long exposure photographs suits the slightly surreal appearance of the installation nicely.

I was lucky because the lines created by the moving clouds look like an extension of the installation’s waving traverse which results in coherent and harmonic composition.

Everything used to be better in the old days

While I was standing there waiting for my exposures to finish I was approached by a cyclist. He wanted to know what I think of the new installation and if I like the new one better or now. Not having seen the first installation in person with the memory of some old photographs being very vague, I could not answer him, so I asked him if there were any different. He said that the old one was much more filigree and „wavier“ too. He liked the old one better.

Later at home, I googled photos of the original installation and compared them to my own, and I found that he was right in every way. For the old installation, they had used much fewer cross braces. However, even though I also prefer the old version of it, I think the new one still is impressive enough as it is. Here’s a picture I found on Wikipedia, so see for yourself. 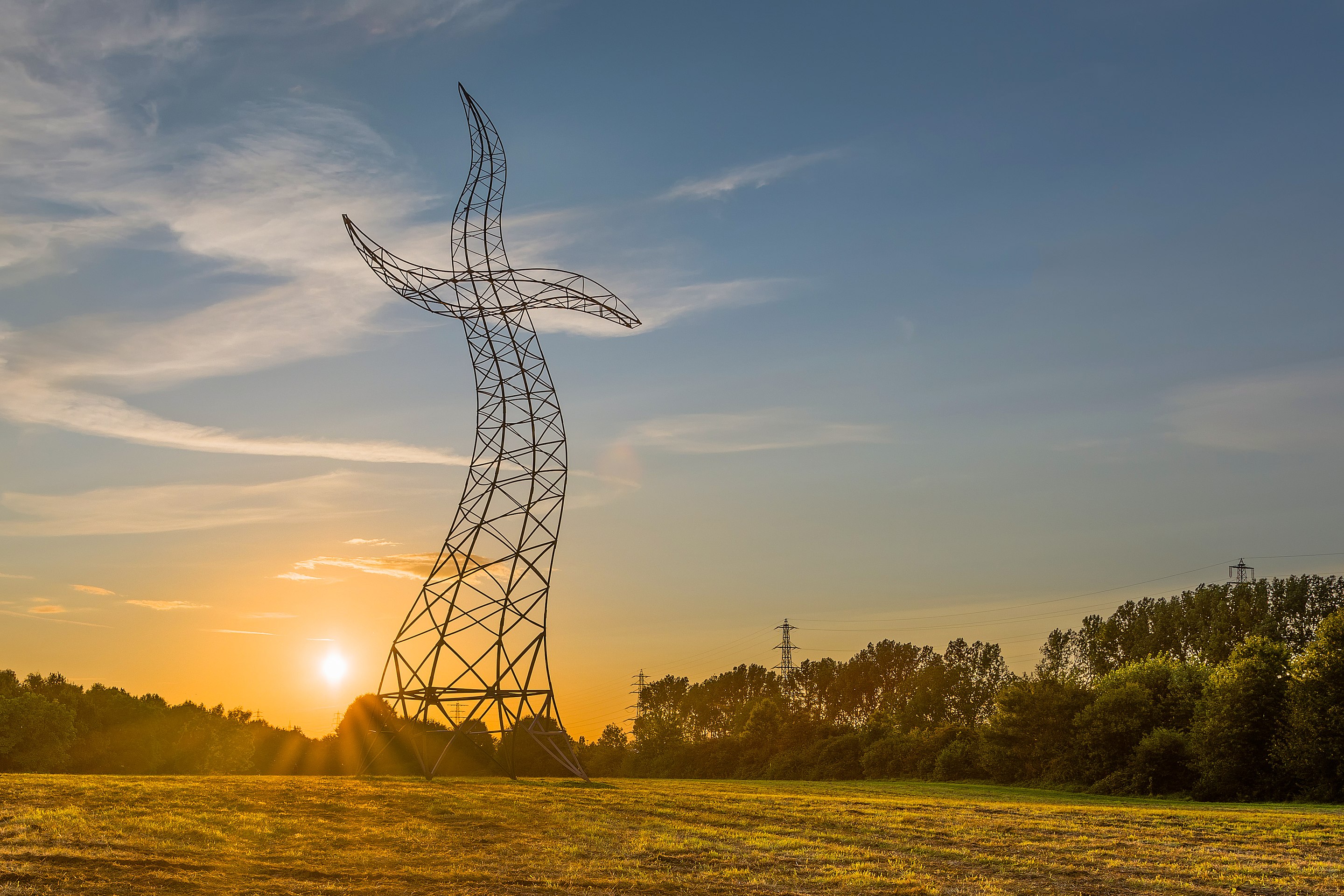 While I was there exploring the area, I found this interesting sculpture. It was set on a quite sizable (3-4m tall) rusty iron pillar, radiating dim blue light. I am not quite sure what they are. Later on Wikipedia, I found out that there are five of these sculptures in the area; all of them shaped differently. I shall have to look for the others one day as they might serve as exciting subjects for abstract photographs. For now, however, here’s the photo I took of the sculpture’s top end.

Coming back to the Sorcerer’s Apprentice, I found another interesting composition. Taken from quite a distance away, I had to use a focal length of 135mm on my APS-C camera (approx. 200mm on a full frame camera). I decided to compose around the top end of the installation with an epic wall of bright clouds in the background. Feel free to come up with whatever associations you like. To me, however, it looks like the power pylon is dancing in the sky celebrating the beauty of nature.

I will return to the Sorcerer’s Apprentice at least once, probably in a couple of months when the fences and the heap of earth have been removed, and I can get even closer than this time. Stay tuned.