Welcome to HoME, the House of Monochromatic Exploration

The times, they are a-changing

I have shared images for more than 9 years now with increasing intensity. On FlickR, I have posted one photo per (almost) every day for more than 2 years now. On FlickR alone you can find almost 1500 of my images. And for the most part, we aren’t talking holiday snapshots here. For a long time, it has been fun. But all good things must come to end. I will dramatically change my posting habits from now on. Read why and how and learn about an opportunity to meet and work with me in my new photography mentoring program for The Arcanum.

There can’t be any doubt — I have benefitted beyond description from photo sharing on FlickR. When I started out, I was a bloody beginner. I didn’t even own a DSLR and in those days this acronym was equivalent to image quality. Those were the days before mirrorless or smartphone cameras. I posted some images and received feedback. Real feedback. Not necessarily extensive feedback, but meaningful nonetheless. Back then you had to actually click on an image to get to the large version before you could do things like commenting and staring. It was in those days that I learned about terms like composition, color contrast, black & white conversion. I posted little in the beginning and so learning was slow. In 2007 I got my first DSLR and to master it I had to learn concepts like exposure, aperture, focal length depth of field, ISO and image noise and so on. Again, the feedback I got from FlickR users was invaluable and pointed me into the right direction quite a few times. Online acquaintances began to form and after a while led to personal meetings. Before I knew it, I was walking around fellow photographers, shooting and discussing photography. I have always felt like the young sorcerer’s apprentice among wise and knowledgeable wizards on those occasions and I was surprised that they were treating me with respect and thought of me as an expert in my field of expertise, too. By that time I had found my niche (monochrome animal portraiture), had found my own personal style (low key close ups with a completely black background) and developed some degree of expertise and craftsmanship in those areas.

If there’s one certain constant in this universe then that everything must pass. It is the bittersweet result the tyranny of capitalism enforces on our lives. If something is out there too long without change then it will become old and boring and less interesting and therefore less profitable. This was true for FlickR, too. Fresh and attractive competition came along and it was called 500px. Larger images, (arguably) better photography and more elegant website design were hard to beat. For FlickR this meant change. So they changed their website design quite a few times to become more competitive. I don’t want to get into too much detail here on the pros and cons of those changes but I do want to point out that at least one change (they’d probably call it innovation) changed the way people used FlickR more profoundly than any other — and that was the ability to star (rate as favorite) images directly on the thumbnail overview pages. Now people could show their appreciation without having to open the image and look at it large scale. How convenient! In fact, it was so convenient that over the years people gradually started doing exactly that more and more which resulted in meaningful comments becoming rarer and rarer. So I started looking for alternatives. And I found: There were none because the things I had started to dislike about FlickR existed on other photo sharing networks, too. And there were still my closer FlickR friends who to abandon seemed like an act of disloyalty to me. So I stayed. But I started to increase my level of activity on Google+. I was beginning to feel the wind of change. 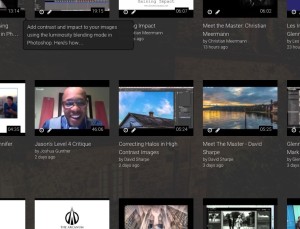 A glimpse into the Great Library

I don’t remember exactly when I first heard of The Arcanum but I do remember how intrigued I was by its concept. Here, finally, was something that could be everything FlickR had been for me in my beginning days of photo sharing — and much more. A place where I could learn photography and converse with fellow photographers around the world and on top of that an ever-growing library of resources on all things photography. It wasn’t free and it wasn’t cheap but I applied immediately. There were waiting lists but in June 2014 I was approached by Martin Bailey, a teacher at The Arcanum (teachers are actually called Masters there), who asked me if I wanted to join his class (classes are actually called Cohorts in the Arcanum). Describing my experience in The Arcanum is certainly worth a blog post on its own. So it must suffice to say that the experience didn’t only live up to my expectations, it exceeded them. By far. Tasks and studies, exercises and critiques were not only fun, they were also challenging and I learned a lot. But what is most valuable and rewarding in The Arcanum is the interaction between the participants. There simply is no superficial „Great shot“ kind of commenting. Comments there have depth and almost always are not a one time activity but the starting points for meaningful conversations. Feedback there is always constructive and less about personal taste of the critic than about the artistic goals of the photographer. Using the infrastructure of Google+, the participants hangout together on video conferences, allowing deeper connection. You just can’t make friends with an avatar, but it is possible when actually talking to each other and laughing together.

The House of Monochromatic Exploration, AKA HoME

As you can imagine, being a part of such a community can be time-consuming. I have been a member of the Arcanum since June 2014 and yet I have kept up my daily posting habit of on FlickR. Now, however, this is going to change. I have been offered a position as photography mentor in the Arcanum. I accepted and for the past 6 months have done training and now I am finally ready to begin my work. My Cohort’s name will be „House of Monochromatic Exploration“ and I lovingly call it HoME.
This means that I will have significantly less time to post on FlickR. I will not give it up completely but there’s no way I can keep up my daily posts given my new duties and challenges for the Arcanum.
For you, dear reader, this new also is an opportunity. If you share my views on FlickR and other social networks becoming more and more meaningless and superficial and if like me you are unhappy about this and looking for alternatives and a chance to collaborate with a great bunch of fellow photographers, mentors and possibly with me then the Arcanum might be the right place for you.
If you are curious what the Arcanum in general is all about, then head over to their website and check out the information there. If you are curious what kind of learning experience I offer in my cohort, then head over to the overview page I have put together.

I just stumbled across your photos on Flickr tonight because of Explore. I couldn’t agree with you more about the changes in Flickr, however I can’t complain because I am so consumed with my job, I am one of the guilty ones who has fallen into the bad habit of not posting comments, just clicking Fave. I have a long ways to go to even feel I could discuss photography intelligently, though it is a dream of mine in retirement. One thing I am sure of in reading your blog and in seeing just a few of your photos-you are a Master, not just of photography, but of writing, as well.best of luck to you in your HoME!

Thank you for your extensive reply, Susan. Discussing photography intelligently really isn’t so difficult if you do it with the right bunch of people. Even if you don’t feel too knowledgeable in that area, you can still do the most intelligent thing of them all: Ask questions.

[…] of the tasks the Apprentices in my Cohort for The Arcanum is to dig into The Arcanum’s Grand Library, a vast collection on tutorials […]

Well, I finally found your blog and read about the Arcanum, even visited the site.
I don’t know, I am a little bit scared about this sytem with masters, mentors and this esoteric name. I know it from Tarot Cards and the system of mentoring remembers me sect structures or the Orden of Templers 😉 But may be I have too much imagination here.

You are doing nice work Christian, your animal portraits have personal style and are great. My experience as artistical working being is, that formation is the basic of development, but there is a point in each career, you have to decide where /who you are, whether you need more teaching or whether you’ll proceed in your own way.

The last courses I did, showed me up that teachers (what formation/knowledges do most so called teachers have?) often are the reason for stylistic confusion … as special when they have their own personal style. So be careful and find YOUR way up,
hoping to do the same 😉
Ruth

okay I saw the video, you’re a Master 😉

I’m one of Christian’s apprentices. This sentence says it all:

“If you share my views on FlickR and other social networks becoming more and more meaningless and superficial and if like me you are unhappy about this and looking for alternatives and a chance to collaborate with a great bunch of fellow photographers, mentors and possibly with me then the Arcanum might be the right place for you.”

Nothing will improve your photography and love of photography more than being part of a community. But it’s not small or cut off like a closed group through the genius of google+. We are a small and growing group in HoME but Christian has invited his fellow apprentices and masters. From there you grow your circles and engage far and wide across the The Arcanum and the vibrant google+ community of photographers.