February 3, 2015
In the “How did I do it?” series I take you through the various processing step that resulted in some of my images. They are not fully fledged technical tutorials that explain all the aspects, parameters and functions of the various tools that shown. Instead, I show you how I used them to achieve certain looks and overcome creative or technical obstacles. They are meant to be a source of inspiration in the first place, but not so much a source of technical information.
In today’s post I’d like to show you how I came up with the subtle toning of my photo Silence #2 (Cool Vista Varitone Luminosity Blend – see above). The title refers to the techniques I used to get where I finally ended up. While all you are going to read and see might look like I knew what I was doing, I really didn’t. As usual, I didn’t know what I was doing and didn’t have a clear goal of any kind. I was just experimenting and stopped when I came up with something I liked. So here we go.

The original shot was taken on a beach on the east coast of Majorca in the early morning hours. Well, it was about 7:20 AM in October, so it wasn’t really that early. But since I was on vacation it was pretty early for me. The beach usually is pretty busy, but not at this time of day. Apart from an occasional jogger and another photographer I had the beach pretty much for myself. The beach is set inside of the huge bay of Alcudia and this particular stretch features a quite picturesque jetty which is used to get tourists on their way to various boat trips. 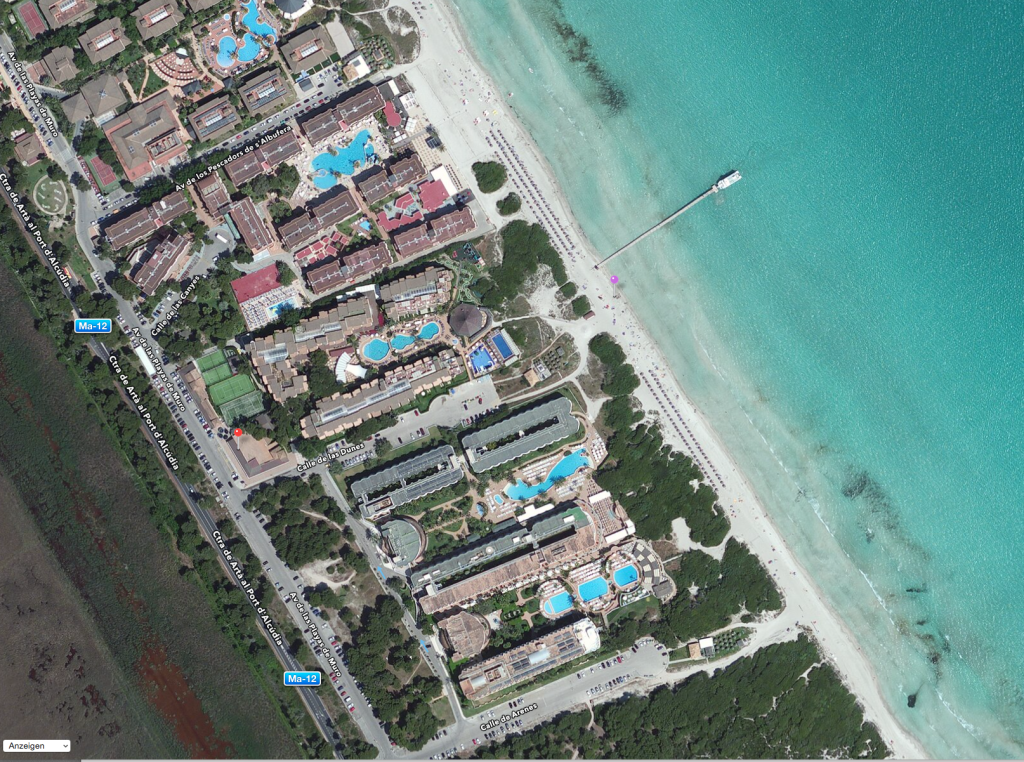 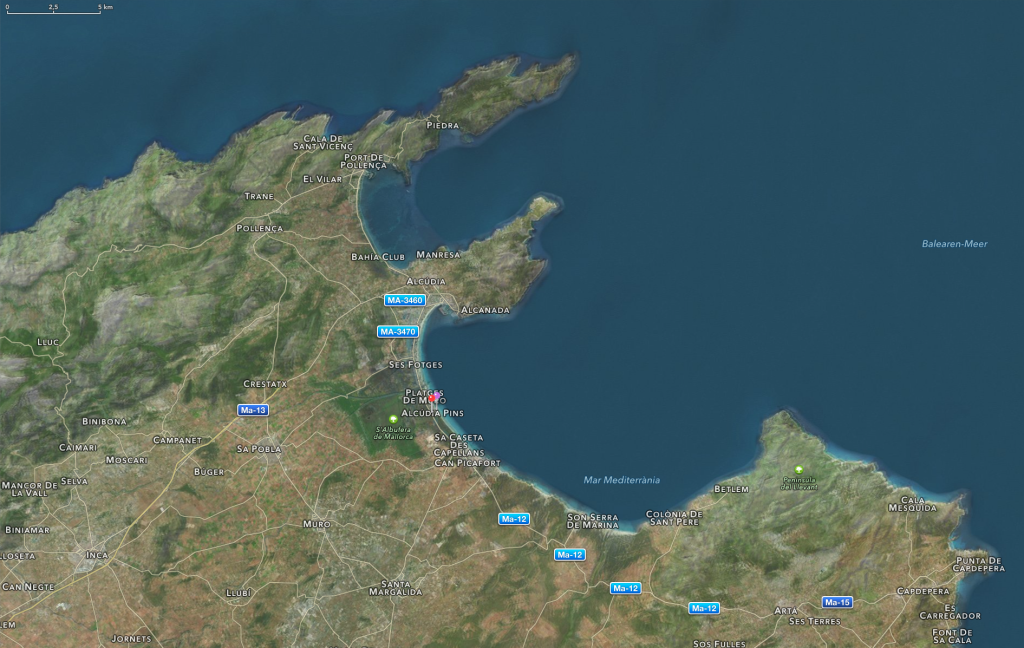 The concept was pretty simple: Long Exposure and sunrise. I used a Hoya neutral density filter. This and the not too bright light of dawn resulted on an exposure of 30 seconds. My goal was to remove as much of the motion in the water and pretty much everything else to create a truly silent and peaceful atmosphere. Here’s the original shot I got out of camera. 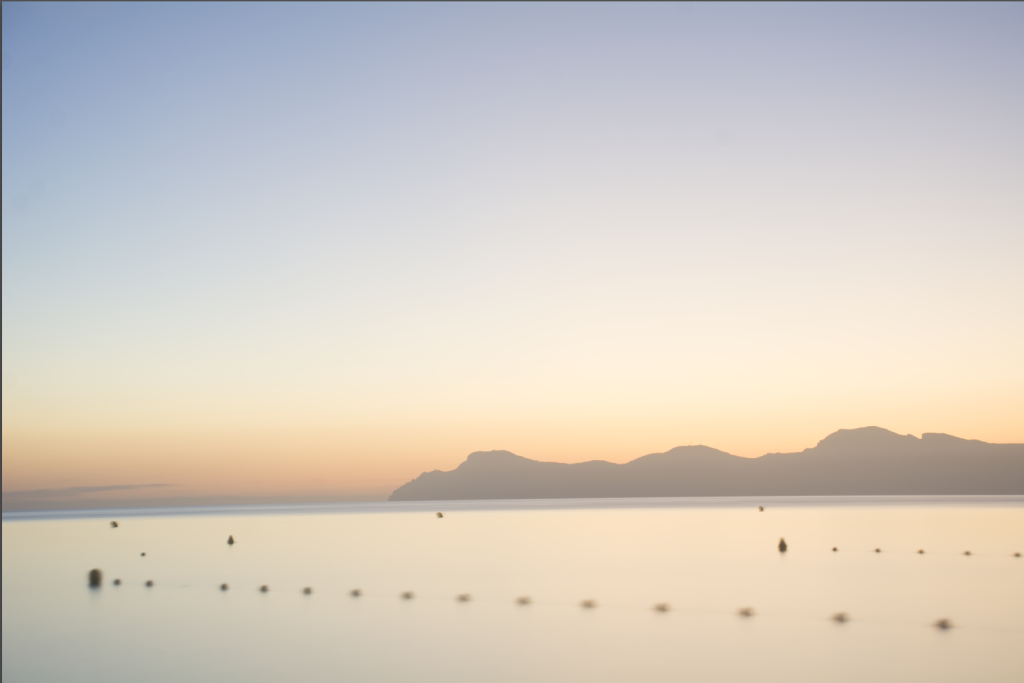 The first step was to remove some of the clutter, change the camera color profile from Adobe Standard to Camera Neutral and apply Lightroom’s standard lens corrections. These steps took me here: 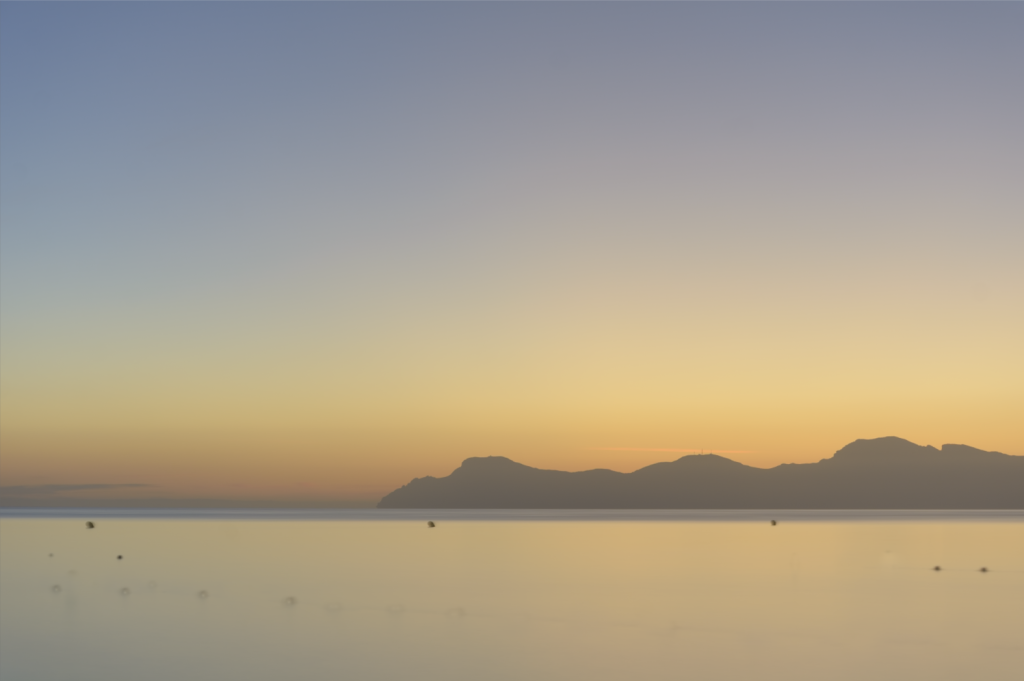 Obviously, Lightroom’s Repair brush has its limits, so I handed the image over to Photoshop with it’s superior content aware repair tools that helped me to remove the clutter in the water completely.
The next thing I worked on were the colors. Ironically, the first thing I did was to create black & white version, so I handed the image over to Silver Efex Pro 2. I won’t go into detail on what I did within that app here. Instead, I’ll just show you the result: 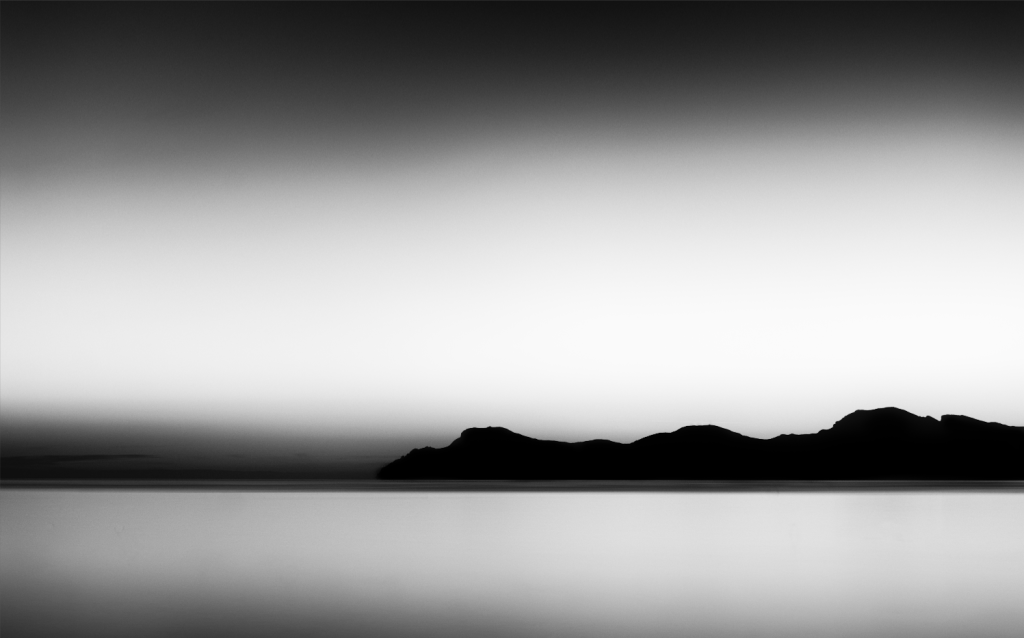 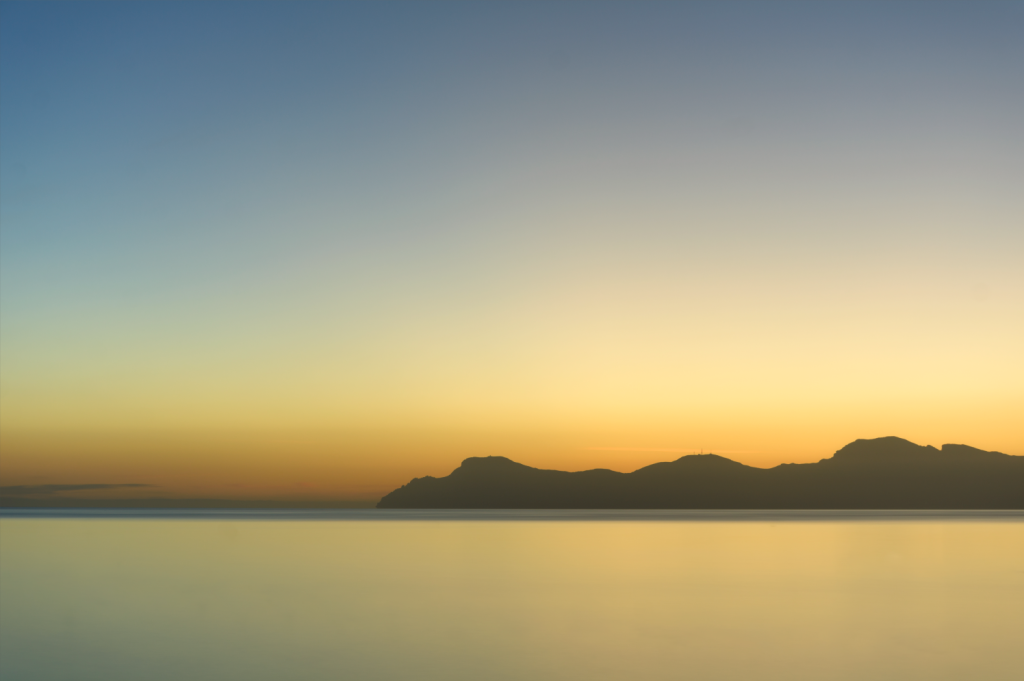 However, they were still pretty flat, so used the luminosity blending technique. Here is where the monochrome version comes in. I opened both, the monochrome and the color version as layers in Photoshop with the monochrome version on top and the blend mode set to Luminosity. Thus the brightness of the pixels of the top layer is used to control the brightness of the pixels of the bottom layer. When used in combination with a black & white version of the same image, this technique will make the resulting color image much punchier and often crisper. Sometimes it gets too contrasty. Then you can pull back the strength of the effect by reducing the top layer’s opacity. In this case, I also used Curves and Saturation adjustment layers, too, to pull back the effect a bit. This is the result. 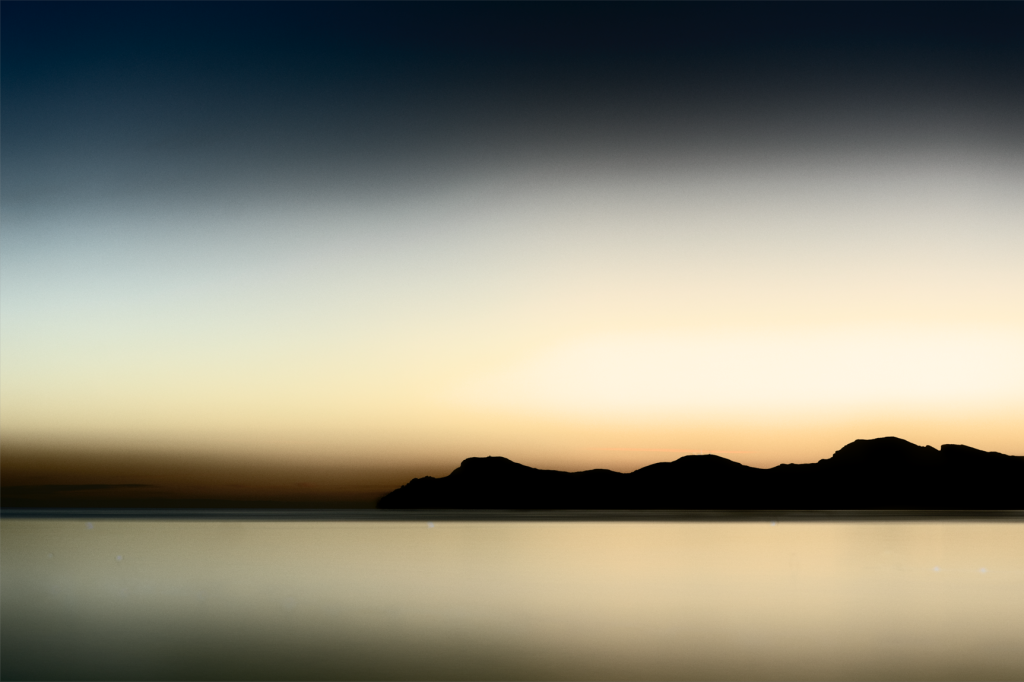 The resulting image was much better in terms of contrast and tonality. I might have stopped there but I didn’t like the colors I got anymore. So I applied a VSCO film preset, the Agfa Vista 100 Cool. This added more punch to the blues and greens while keeping the keeping the yellows intact. 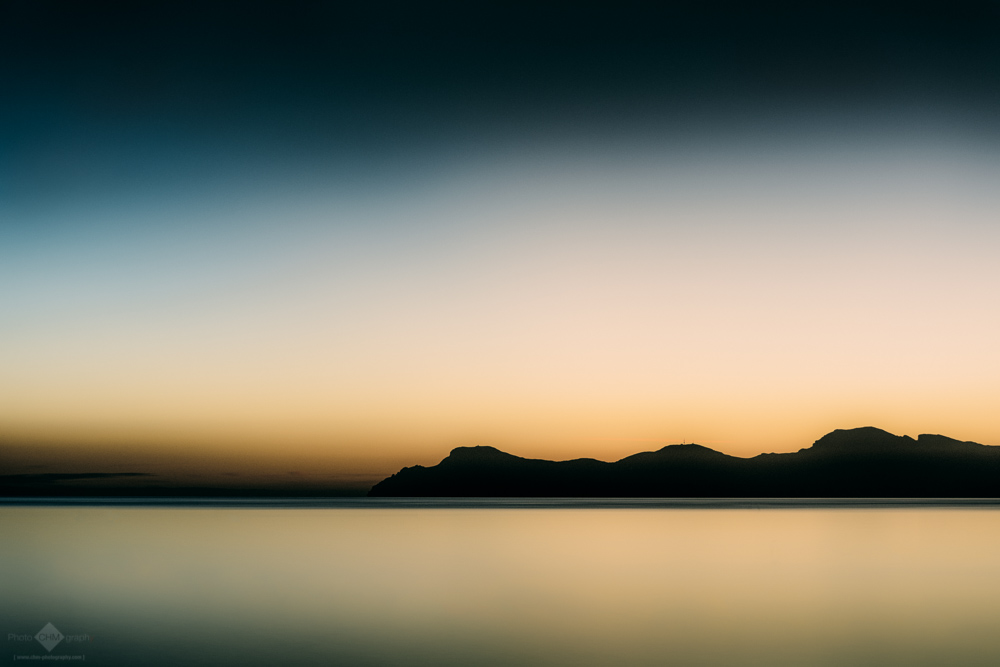 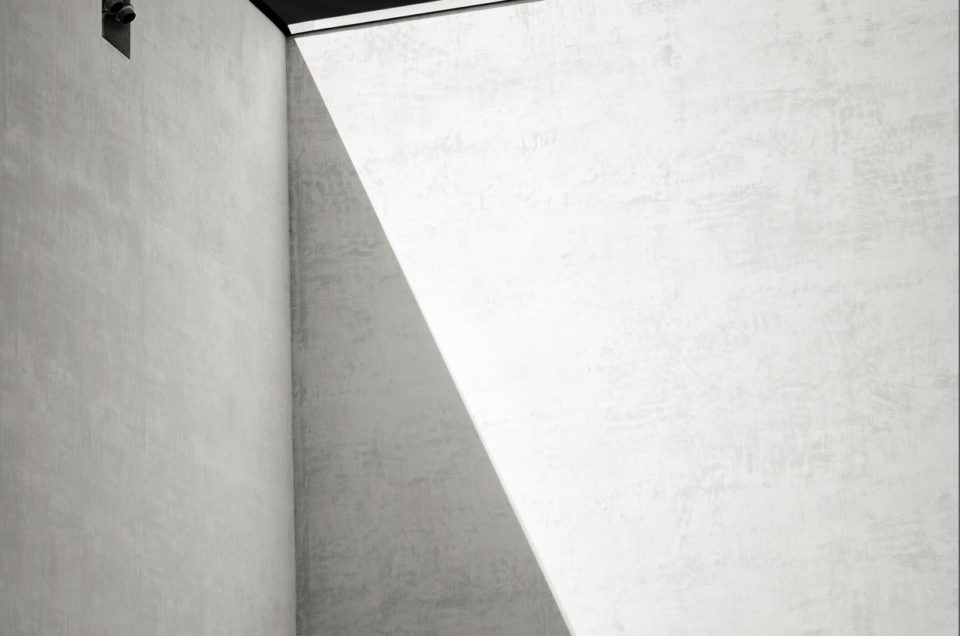 Tigh-na-sleubhaich – Evolution of a photograph
September 25, 2016

Excellent! I appreciate the way you went through this step by step. I love the tonal work and I was pleased to see your finishing touches as those are reminders for me as well, when working in subtle gradients like this. It gives me an idea to try this with my b&w and color versions of December Moonrise I did from 2013. I like both, but a treatment like this might give me a third alternative I hadn’t considered. Thanks for the tutoring!

I am glad this post was helpful. Please let me know if you get to a presentable result.

I am going to present a couple interpretations of a December Moonrise on the Facebook Arcanum page in a bit. Thanks again for the tips. I wish I had an image as suitably dramatic as this one, but it’s always nice to have the knowledge of what can be done if and when I enter into a scene such as that.

Just a beautiful image and great breakdown of the steps you went through to achieve this look and feel for your photograph.

Hi Christian. My name’s Mike and I work for NPhoto magazine, a Nikon photography magazine based in the UK. We would like to talk to your about featuring one of your fantastic images in the magazine. If you’re interested please drop me a line at mike.mcnally (at) futurenet.com. Thanks!