Tigh-na-sleubhaich – Evolution of a photograph

Tigh-na-sleubhaich, that’s the name of a picturesque cottage ruin on the West Highland Way. It is situated right in the middle of nowhere about 5km away from the village of Kinlochleven. Being the only structure of its kind, it has been photographed to death and even though I haven’t checked them all, I think it is safe to say that you’ll find a photo of this house in most (if not all) travel guides on the West Highland Way. Read on to learn about the steps I took to get from the rather dull original image to the final photograph.

Evolution of a photograph

Getting the colors right

When I was there, I took three kinds of photos of Tigh-na-sleubhaich. The first one was a really tight crop of the house with only the peak of Stob Bàn background. Here is the image as it came straight out of my camera.

I deliberately composed the image so that the right diagonal of the mountain is nicely aligned with the diagonal of the houses roof. However, there are a couple of challenges in this image:

With these tasks at hand, the first adjustment that comes to mind is Clarity (in LR). The problem with images like this, however, is that Clarity pretty fast creates ugly soft halos in areas of high contrast like the line between the mountain and the sky. We therefore have to find a way to do the job without using the Clarity slider (at least globally). Fortunately, there are lots of greens in this image. Technically, greens consist of yellows as much as of greens (if not more). Separating these two colors by increasing the yellows and decreasing the greens using the HSL brick in Lightroom doesn’t only brighten the grass as bit, it also creates a lot structure – without using the Clarity slider. We can also change the hue of the yellows and the oranges a bit to adjust a little more warmth and perceived saturation to the image without using the Vibrance or Saturation sliders. While we are at it, we can also increase the luminance of the orange tones to slightly brighten the house. Here are the adjustments I made in the HSL brick:

Here the image as it looks with the above adjustments applied: 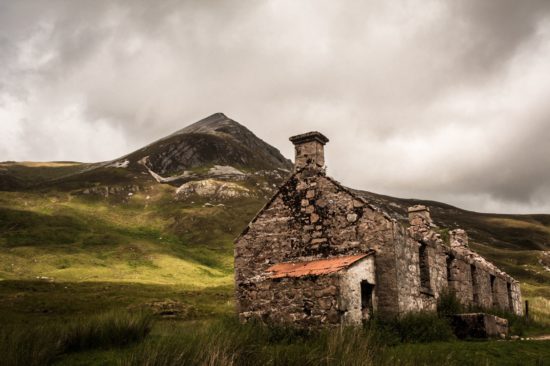 This is definitely a step in the right direction, but the image still needs improvement. So I used an adjustment brush to brighten the house and add some clarity, contrast and warmth to it. This is the result. 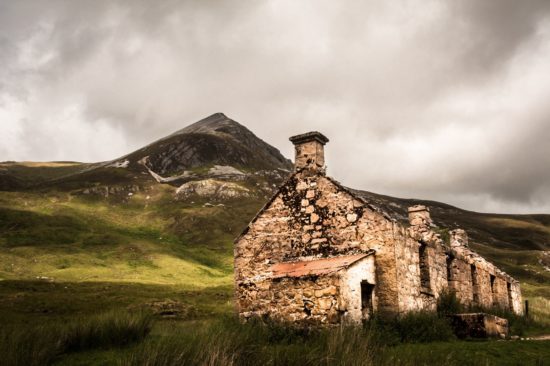 Now the house stands out nicely. So, the only thing left to do is add a little drama to the sky. I used a gradient filter to darken the highlights in the sky. I only added just a bit of clarity to keep the effect subtle and to avoid halos. 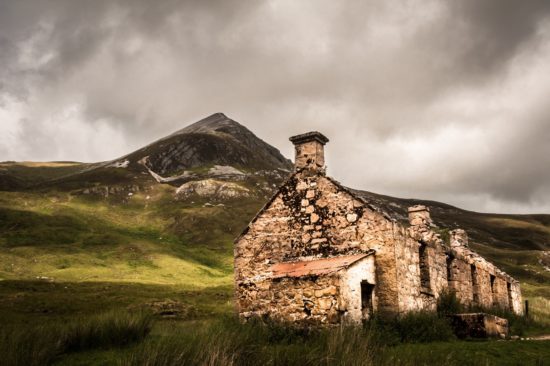 Now we are almost there. The last step was to apply high pass sharpening on the house in Photoshop. This helps to let the house stand out even more. Here’s the final image.

Of course, I also tried a black & white version of the image. As usual, the monochrome conversion completely changed the image in character from a more lively to a more timeless appearance. Note that I added a subtle sepia toning to the image. This is something I often do in monochrome images to create a softer appearance.

When I shared the photo with my friends in The Arcanum, I received a lot of valuable feedback that helped me to make the image what it is now. Some guys, however, found the crop I chose too tight and would have liked to see a little more space on the right. Fortunately, I had taken an image with this exact idea in mind. This is how it came out.

This version doesn’t only include Tigh-na-sleubhaich and Stob Bàn but also the West Highland Way itself. To me it has more of a storytelling character and it lessens the house itself in importance.

To make things complete, here is the monochrome version of this wide-angle photograph.

It is up to you to decide which version you prefer. I like them both. Choose your poison.

To round things up, here’s the third alternative photograph I took of Tigh-na-sleubhaich. I took it from a completely different angle after I had walked on a couple of steps and turned around. Enjoy!