On this day I made the acquaintance of Scotland’s famed liquid sun, climb the highest point of the West Highland Way, peek into the entrance of the famous Glen Coe and go back to the beginning. Read on… 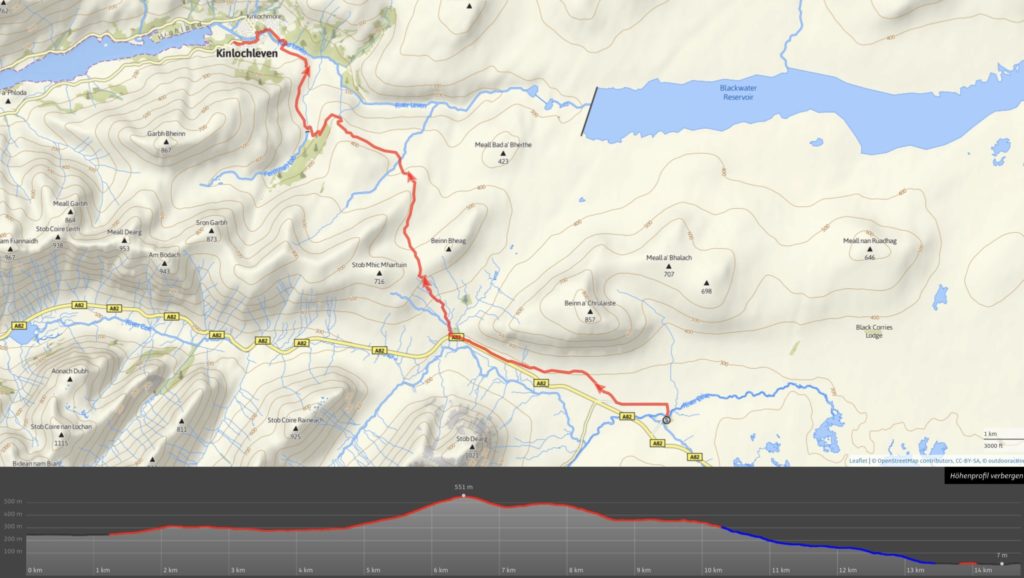 Of course, it had started to rain in the night. After all, it’s Scotland! It was both, fascinating and discouraging to look out of the window and see the clouds hanging low on the slopes of the mountains, so low, in fact, that they almost seemed to touch the roofs of the houses in some places. I quickly snapped an image with my iPhone to send it home to my folks. 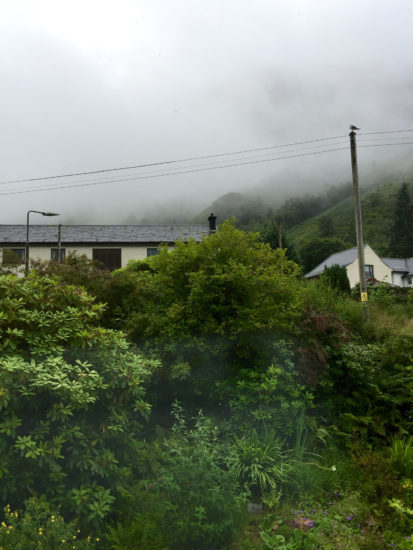 Those clouds really came down low on this morning. Taken with my iPhone 6+.

After breakfast, I started out early. The first meters were easy walking, and I got the opportunity to get a few shots of mountaintops covered with clouds even while I was still in the village. The bridge over the River Leven proved to be an excellent spot for taking photos. 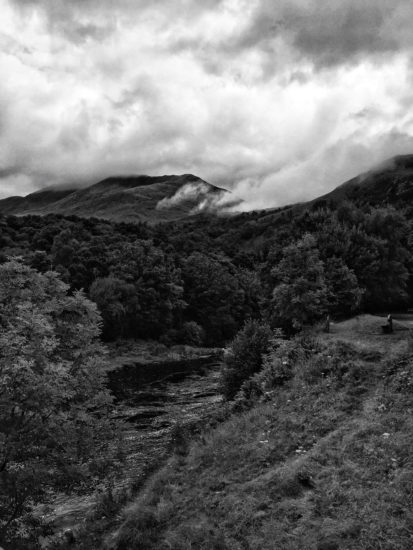 Taken and processed on the spot with my iPhone 6+.

Shortly after I had left the town, however, the long ascent began. Long ascent, this means climbing more or less continuously to an altitude of about 547 meters over a distance of approximately 8km (see the profile above for reference). Steep climbs alternated with shallow passages, but the ascent never really stopped. Fortunately, though, there were plenty of beautiful vistas and photographic opportunities along the way so that I got ample opportunity to catch my breath while I was walking.

This is one of the most impressive cloud formations I have seen on my whole trip. Nikon D7100, Nik Silver Efex Pro 2, Lightroom & Photoshop.

After a while, the West Highland Way left the woods and all of a sudden I found myself in the green and lush landscape of the Scottish Highlands. Vast vistas wherever I turned, and in the distance, there were rows of mountaintops covered by clouds and mist – a fascinating spectacle of nature. Despite the weather, there were quite a few people on the Way. While it was never exactly crowded, I never really had the feeling of being alone.

This one is a tricky image to convert to black & white, and I am not entirely happy yet with the result. This is pretty much work in progress.

They say every good landscape image needs a foreground element. To me, the highlands don’t need such a thing as despite all of their barrenness they are impressive enough on their own.

On my way, I met a couple from Austria who also seemed to walk the way southwards but were camping. As true Austrians, they were used to walk in the mountains and therefore able to walk much faster than me. Soon there were gone, and away, no wonder as I had to use every opportunity to catch my breath, camouflaged as the enthusiast photographer.

The weather changed for the worse. More wind, more rain – a first true test for my equipment. I decided not to use my rain cover. The rain wasn’t that strong yet. But it got stronger from time to time.

Check out the subtle lines of the hilltops in the gray clouds in the bg.

Looking down the Devil’s Staircase

So I fought my way up to the point which according to my guidebook was the highest point of the West Highland Way, the pass between Stob Mhic Mhartuin and Beinn Bhjeag. The reward was a splendid view of the mountains in the north. While I was standing there, a family from Austria joined me. They said that on a clear day you could even see Ben Nevis from this spot. But it was far too cloudy to be sure. From afar, most mountains look the same anyway.

One could not appreciate the immense wide open of this scene without the presence of the tiny walkers in the frame.

The view southwards was no less impressive. The infamous Devil’s Staircase, a long, steep and treacherous climb for those who came up from the south, zigzagged its way down. It took the eye into the distance and to the majestic entrance of Glen Coe, flanked by the mountains of Stob Dearg and Creag Dubh.

Check out the tiny white house to get a sense of scale.

Descending the Devil’s Staircase was not an easy task. The terrain was rocky, muddy, slippery and the path sometimes quite steep. If the rocks and stones start sliding under your feet, grip ceases to matter, and even the best walking shoes will not help you. More than once my walking sticks saved me from falling. On my way down I bypassed a couple of brave walkers for whom the ascend was a truly character-building experience, even more so because they were carrying heavy camping gear. I thanked my stars that I had to go southwards and down the Devil’s Staircase.

Back to the beginning

From the bottom of the Devil’s Staircase, only a relatively short and compared to the earlier stretches quite easy way leads to this day’s destination, the King’s House Hotel. Being situated all alone in the middle of nowhere, it doesn’t face any competition. It offers a whole range of services to its guest. It is a pub, a restaurant, accommodation and camping grounds.

I got to enjoy none of their services because for this day my travel agency had made quite a peculiar arrangement. Either because they couldn’t or didn’t want to book me into the hotel, they had organized a taxi service (wonderfully touristy called Rob Roy Taxi). This taxi would take me from King’s House Hotel back to the starting point of this day’s walk, to Kinlochleven into the exact same B&B I had stayed in the night before. In the morning, the same taxi would take me back to King’s House Hotel. This whole arrangement felt kind of strange because it seemed that I had gone through all of today’s strains for nothing.

While I was waiting for the taxi to pick me up, the Austrian couple left the pub where they had had dinner. A few friendly words and off they went.

While I was waiting for the taxi, I unpacked my 300mm tele lens to get a close up of the mountain peak.

The taxi driver turned out to be friendly and quite talkative. I gave my best, but I was pretty tired and not really up to small talk anymore. At least the way back to Kinlochleven took us through the magnificent Glen Coe of which I learned that the locals simply referred to as The Glen. They used the name Glencoe for the same-named village in the glen. The views to behold there are beyond description. I decided there and then that I would come back to this magnificent place one day for some proper landscape shooting.

Back in my room in Kinlochleven, I checked my gear. It was still dry. Only the contents of the small top compartment were slightly damp as apparently, some moisture had started to creep in. Good job, f-stop gear. For days with stronger rain, however, I decided there and then that I would use my rain cover. And days with stronger rain should come.

Nicely framed by the trees and the clouds.

On the next day, I started out from King’s House Hotel and headed farther south, bypassing the western outskirts of Rannoch Moor and ending up in the middle of nowhere.