It’s the same with everything we do. There always a superlative. There’s always the best, the coolest, the most impressive or breathtaking, most beautiful. But there’s also the hardest, the most strenuous, the least pleasing and most annoying, the toughest. On my hike on the West Highland Way, this was day 6. And here’s why. 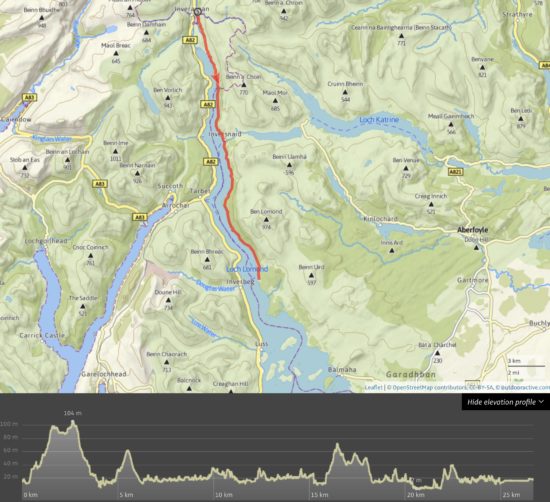 Let me be clear about something. I don’t want to complain or moan too much here. After all, I knew the trip was going to be tough right from the very beginning. However, if the purpose of this travelogue is to give you an impression of what it feels like to walk the West Highland Way, then I mustn’t act as if everything was okay and comfortable and cast a veil of silence over the bad and ugly side of things.

The first reason why this walking day was the least on enjoyable is the weather. In short, it was raining almost continuously all day. And it had been raining all night before. So, the trees didn’t offer any protection. The fern along the way was thoroughly soaked – and there was lots of it. While I was walking, I inevitably brushed along the leaves which soaked my pants in no time.

“Strenuous in a different way.”

That’s what John had said in Rannoch Moor when we were talking about this stretch of the West Highland Way. But he hadn’t been the first one to warn me about the difficulties here on the shores of Loch Lomond. My West Highland Way guide said, “Although there have been significant footpath improvements to many stretches, it remains a demanding walk that should not be undertaken lightly, even by strong walkers.”

I had also watched quite few YouTube videos by walkers who have documented their hike with their GoPros, smartphones, and selfie sticks. Every single one of them looked much fitter and experienced than I felt. And yet, every single one of them was huffing, puffing, and moaning about this stretch of the West Highland Way.
I wasn’t an athletic walker; this much was clear. But all these warnings and useful pieces of information didn’t prepare me for what I experienced on this day. In hindsight, I have to admit that given my lack of experience and comparatively bad shape I probably had taken on more than it would have been reasonable to handle. I made it in the end, but with no small degree of luck and a blow for my morale that would last far into the following days.

This description pretty much summarizes what faced most of the time. Except for short stretches at the beginning and the end of my day, for the most part, I had to climb up and down steep and rocky or muddy ascends. All of them were short but also challenging and tricky. Very often, they were dangerous, too, because often the shores of Loch Lomond are steep and high. One mistake and I would tumble down a couple of meters into the water or land on an old branch or some sharp rocks.

What this means is that I had to walk every step deliberately and consciously decide whether this next rock might be able to hold or if that pool of mud was shallow enough for me to step into. It was impossible to find anything close to a rhythm of walking – no automatism, no meditative relaxation, no admiring the landscape. It shouldn’t come as a surprise that I shot most images on this day in the morning before actually left Beinglass or during the few and short breaks that I took.
Here are a few images and a YouTube video which will give you an idea of the “jolly shores of Loch Lomond.” 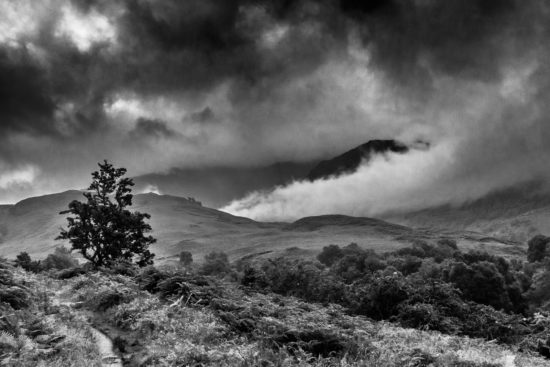 Wet fern wherever you turn 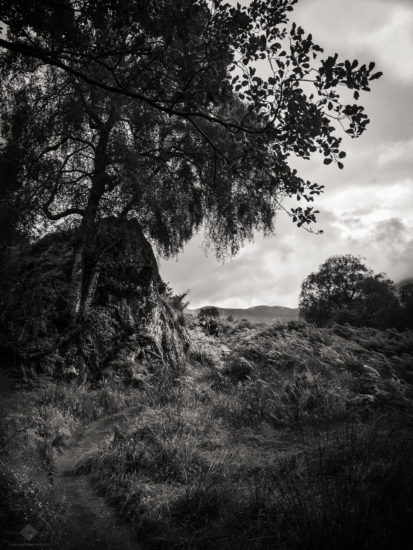 More fern and some rocks 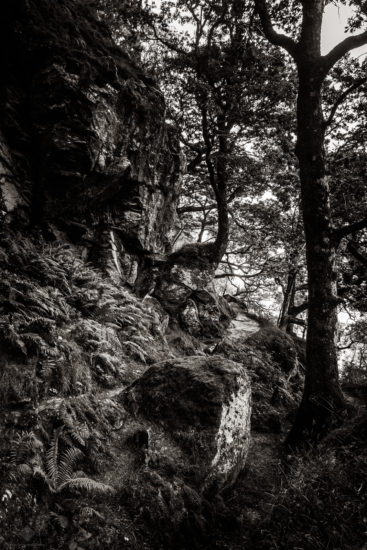 One wrong step and you fall down for several meters

Jump to 3:30 – this is where the interesting part begins.

When I left my room at the Beinglass Campsite, this is what I saw. It was a foretaste of what the day had in store for me. Great!

However, only very few things in life are so bad that they don’t have a good side to them as well. The good thing about rain in the Scottish Highlands is that you’ll get massive amounts of clouds hanging low over the mountains and in the valleys. So, I quickly grabbed my camera, my Peak Design rain cover, and my rain jacket and went shooting. I was able to get some interesting shots, provided you fancy dark and moody landscape photographs. 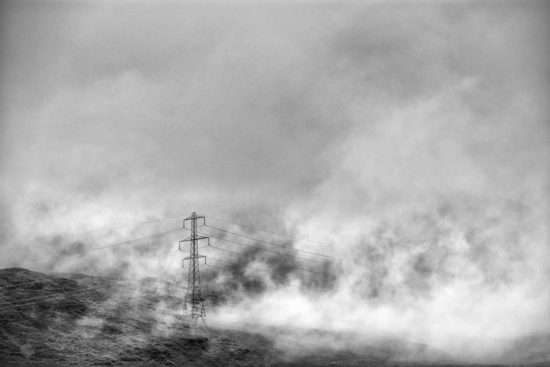 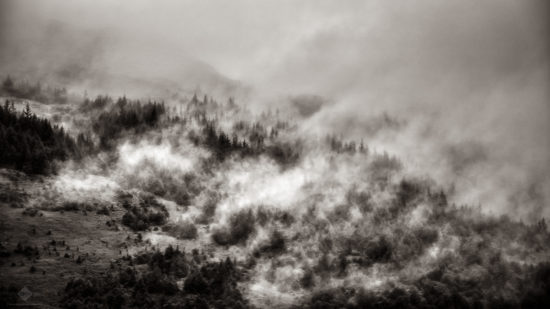 It was fascinating to see the clouds in between the trees. 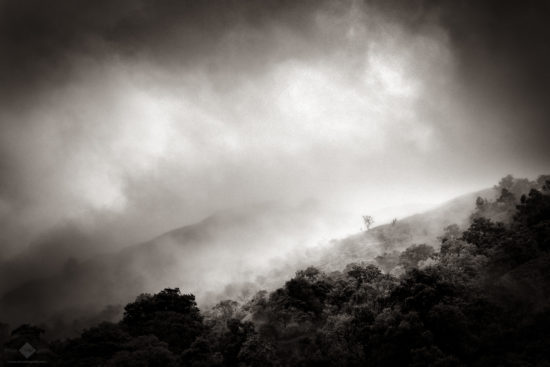 Clouds can be fascinatingly beautiful – if only they came without the rain.

During breakfast, I downloaded the maps for the day and also sent my kids an image of my breakfast. They still find it hard to fathom how one can eat a full English breakfast so early in the day and then be good with it for the rest of the day.

But all procrastination had to come to an end. So at about 9 AM I finally bit the bullet and got on track. Walking in the rain wasn’t as bad as I had feared at first. It wasn’t overly thick, and I liked the quiet sound it made as it fell onto the trees and the grass.

After about an hour I met a walker coming from the south, and we stopped to have a short chat. “You’re going to get to Beinglass fairly quickly as it isn’t far and the terrain is easy.” – “That’s good news. Be careful in about 3 miles. There’s one place there which is very slippery and steep, and your shoes won’t give you any traction whatsoever. I took a fall there, three meters deep. It’s a miracle that I wasn’t injured. Falling onto my backpack might have saved me.”
I thanked him and wished him well. Before long, I would get to know this same place myself.

I soon came to Loch Lomond. It was here where things began to become hideous, as I have described above. The monotonous scrambling was only interrupted twice throughout the whole day. 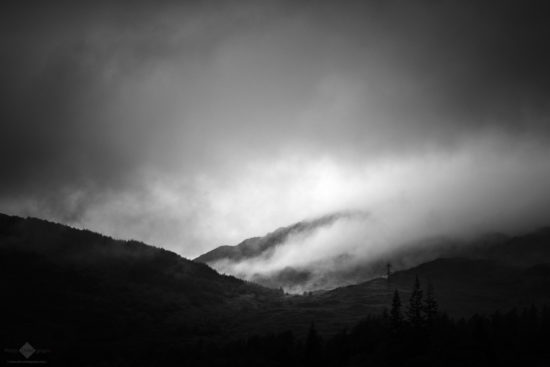 Clouds in the valley 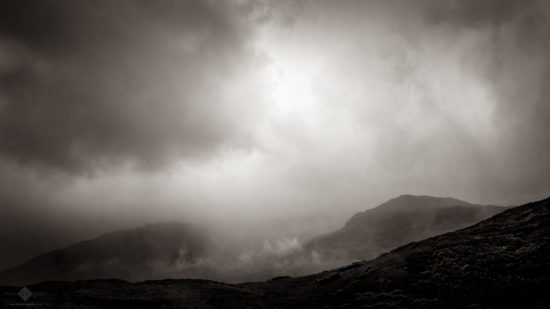 These moody shots have a different kind of beauty. 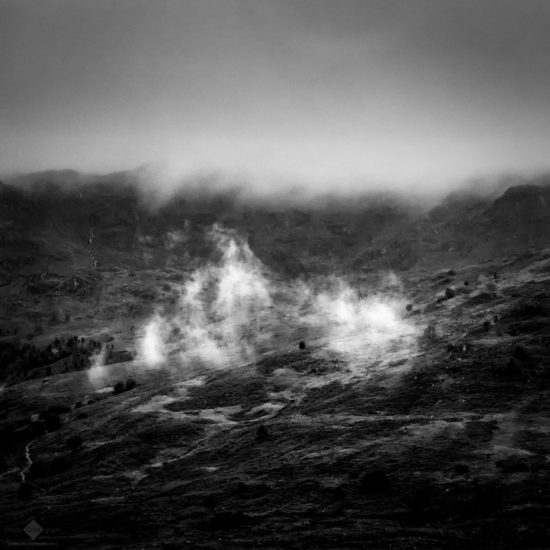 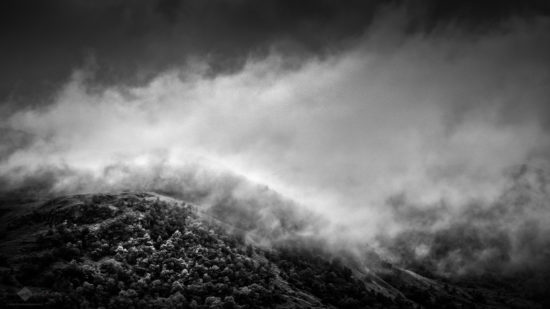 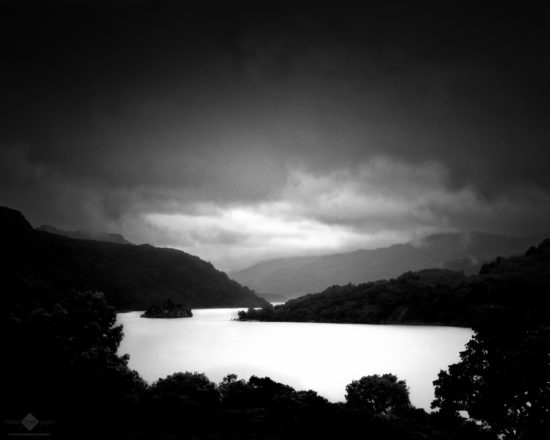 When I reached the banks of Loch Lomond, the rain stopped for about 20 minutes. I took my chances and set up my tripod for a long exposure of the lake with a shapely hill in the background. I like how the clouds turned out, and the water, too, but I am not quite sure yet what to do with the hill. That being said, I’ll share it with you as a work in progress. 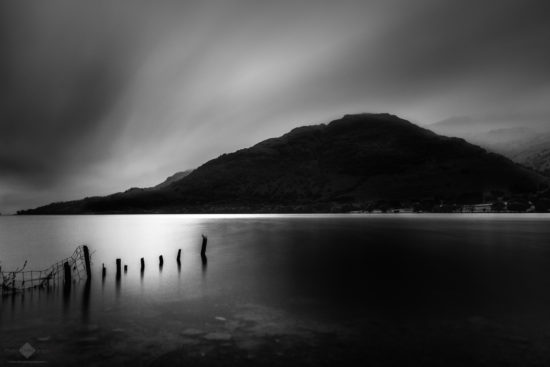 When I came to a tree that had apparently grown sideways across the West Highland Way, I met a quite sizable group of young people. They were all huffing and puffing and complaining about the weather and the hard terrain they had to walk in. 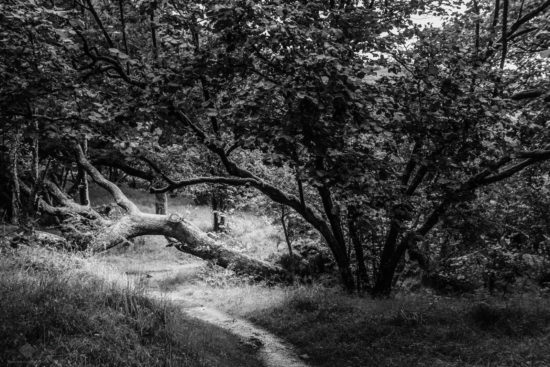 The pathfinders all scrambled underneath this low hanging tree. I stepped aside and waited for them to pass. I couldn’t help but ask myself why no one came up with the idea of climbing over it on the right-hand side.

They were speaking German. I stepped aside and let them pass, waiting silently without them being aware of me being able to understand them. The group leaders followed them. I asked them where they were going. They were walking the West Highland Way, too, of course. But given the lack of enthusiasm of the kids, they weren’t sure whether they were going to make it till the end. I encouraged them and told them that things would get easier for them later and wished them well. 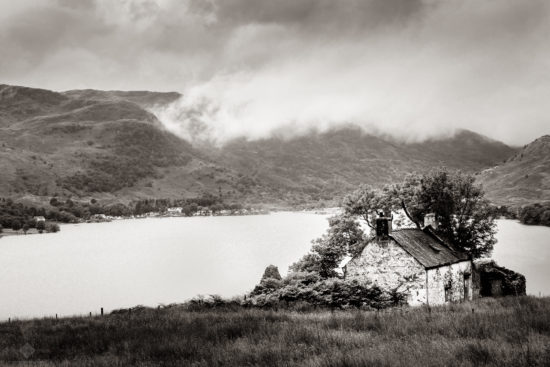 It was after 8 PM when I finally reached Rowardennan Hotel. I was utterly exhausted, and basically, all I did was clean my pants, hang my stuff in the drying room and go straight to bed. If there was a way for me ever to get up again, I couldn’t see it. 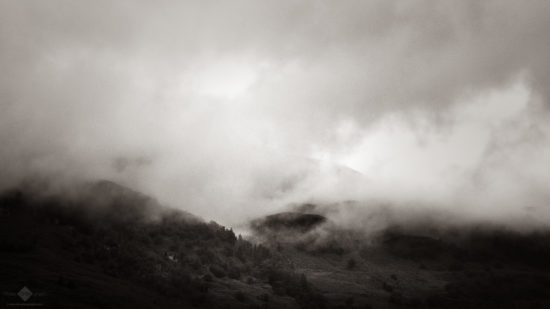 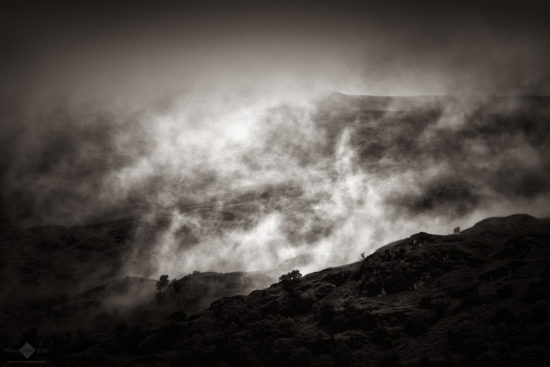 More low hanging clouds. As you can see, things didn’t change much.

It’s always surprising what one good night of sleep can do a tired man. In fact, it’s even more surprising what a bad night of sleep can do to a tired man. Given the fact that the bed was horrible and I didn’t sleep well, I was miraculously feeling refreshed and fit on the next morning. And I needed it because I would have to face the final test on the West Highland Way – Conic Hill. But at least the weather improved.