Let’s face it: You probably can’t walk 154km without things getting monotonous every once in a while. For me, this happened on this leg of the trip. This is not the West Highland Way ’s fault though. The landscape is absolutely beautiful here on this stretch, too. There were several factors, however, that made this leg of the trip slightly less enjoyable than the previous ones. 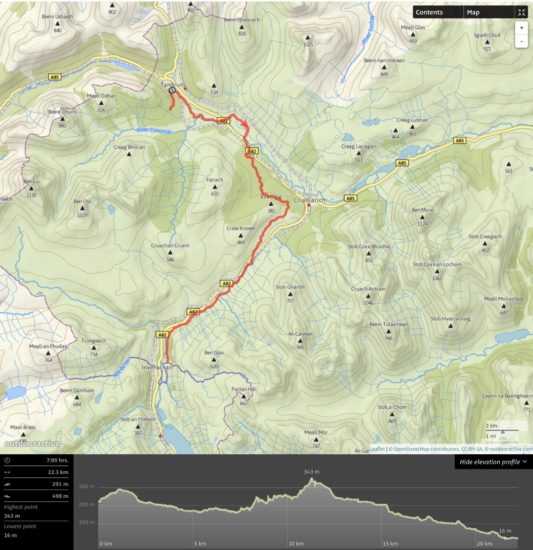 When walking in the West Highland Way, it is always a good idea to keep an eye on the weather forecast. Thanks to modern technology, this is easy nowadays. For me, the forecast held bad news. In the next two days, I would walk into an area with constant rain. Chance of rain would increase in the afternoon. After that, I would pretty much rain relentlessly and heavily until the evening of the following day.

So, I planned to start out early and then head southwards at Warp 9. I hoped to cover as many miles as possible before it would start raining. I can tell you right away that my plan worked nicely and I pretty much avoided any rain on this day altogether, except for a drizzly shower or two. But it came at a price: In my haste, I couldn’t enjoy the landscape quite as much as I had hoped.

Before I could start, however, I had to fix my walking pants. While I did have a spare pair of trousers with me, the one with the broken seam was the water repellent one. My other pair wasn’t. It also wasn’t made of this nice and comfortable stretch fabric that made walking so comfortable, especially in rocky stretches where walking resembled climbing. So I had every reason to fix my pants, as I knew about the rain and the fact that on the next day I would have quite a bit of climbing to do.

With no sewing kit at hand, I asked Chris, my host, if he knew somebody who owned a sewing kit or could even do the job for me. But he didn’t. I wanted to say a pointed word about kilts not having the need to be fixed as they are pretty much open anyway, but I checked my tongue. But Chris had another idea. He handed me a roll of gaffer tape and advised me to put it on the broken seam. I didn’t expect this solution to last very long. But since this was my only option, I gratefully accepted. 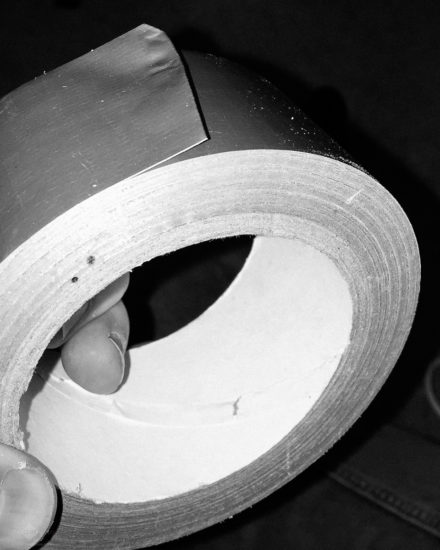 Chris’s gaffer tape. It was pretty old and didn’t last very long. But the concept was not so bad. On the next day, I bought fresh tape which lasted much longer. Problem solved.

In the dining room, I immediately saw that there were quite a few beautiful landscape photographs hanging on the walls. All of them were nicely framed and pretty large. They were beautiful to look at, and I admired their splendor, but at the same time looking at them kind of hurt my heart a bit for two reasons:

Of all the images there was one that stood out. It was much smaller, about A4 size, and it didn’t show a landscape but a Space Shuttle as it lifted off into the sky, fire trail and all.

When Chris came in to bring my food, I asked him if he had taken the image himself. He hadn’t, but a friend of him had. Chris was happy to share an interesting back story about his friend buying an extra long lens only to get this shot and then nearly missing the launch due to severe traffic jams. According to Chris, this wasn’t any Space Shuttle launch but the very last one ever to be made. And his friend just made it there in time, and the Space Shuttle took off just as he had finished setting up the tripod and made the proper settings on the camera. There is no greater adventure than life.

The Tiger of The West Highland Way

The breakfast was excellent and would have satisfied any hobbit. After I had fixed my pants, I got on track. I said my ”Goodbye” and ”Thank you“ to Chris. He noticed my camera asked a few questions and wished me luck. As I turned around to leave, I stopped in my tracks. A cat was sitting on a camping table, watching everything I did with that expressionless and fishy look that only cats can put up. I took my chance and grabbed a few photos. So there you have it, the Tiger of the West Highland Way.

The Tiger of the West Highland Way

The Lochan of the Lost Sword

For once, there wasn’t a huge ascent right at the start. I have mentioned before that I am not exactly the most athletic person on the planet and that I struggle with steep ascents. But I can walk pretty fast in relatively flat terrain, and for long distances, too. So I made good progress right away and covered the first 5 miles in less than 90 minutes, including some photography breaks and despite an increasing pain in my feet that was caused by heel spurs. The terrain was pretty overgrown and only rarely offered grand vistas. After about two miles I came by a sign that told the Legend of the Lost Sword. Read for yourself. 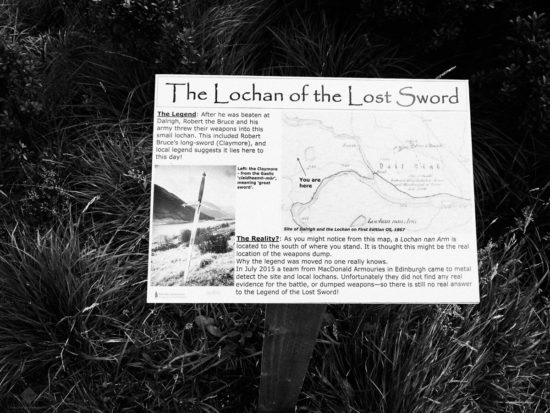 The Lochan of the Lost Sword

I didn’t make any attempt to dive into the pond and look for the sword myself and cracked on instead.

Driven by the need for speed, I cracked on. I walked through the small village of Auchtertyre, passed by the Strathfillan Wigwams and soon reached Kirkton Farm and the remains of St Fillan’s Priory. There are quite a few legends about this priory and Robert the Bruce preparing for the Battle of Bannockburn, but, frankly, there isn’t much left to look at today. There was, however, a small ancient graveyard with a few wonderfully moody tombstones amidst high-grown grass. I quickly took a few snaps and went on.

One of the most picturesque accommodations on the trail.

I had hoped to find a location like this. It wasn’t as remote as it seems though. Kirkton Farm is situated right next to the graveyard.

In the distance, you can see the Crianlarich Hills

Next up was a beautiful view of the distant Crianlarich Hills behind a wide open field with grazing sheep.

The open scenery was quite impressive.

This was the end of comfortable walking. Now I had to face the short, but steep slopes of Fiarach and Kirk Craig. I had climbed longer ascends before on this trip, but for some reason I found this one to be particularly taxing. Maybe it was because it offered relatively few photo opportunities (aka as resting spots) until I reached the end of the climb. There was a fallen and uprooted tree that looked quite impressive, but that’s about it.

The roots were giant and definitely larger than me.

When I reached the end of the ascent on the slopes of Kirk Craig, I was able to capture some scenic views of the area. Or, I should say, I could have photographed them if only the light would have been more favorable. I made the best of situation and hoped I could, if nothing else, create some dark and moody landscape shots. Heck, after all, dark is beautiful, and there’s no key like low key.

Dark and gloomy. In this shot, I tried to accentuate the light on the distant hills. A futile attempt as there wasn’t much light to work with.

Dark and moody #2. This is the same scene as above but differently framed and processed.

So, now I was about to walk through Glen Falloch. Here’s what my guidebook has to say about it:

Glen Falloch is a splendid continuation of the Way, a complete contrast to what has gone before. The river, which is your companion for a while, is a succession of cascades, white-water hollows and rapids, and after heavy rain is an especially fearsome sight. The terrain is a constantly changing scene of open moorland pastures and wooded stands of birch, oak and rowan, and is never dull for a moment.

Well, for me, the experience was quite different. I hardly ever saw the river and in the constantly grey and overcast weather dampened my morale considerably. I should mention though, that the author wrote it from the perspective of a walker coming from the south. These walkers have left behind the shores of Loch Lomond before. For them it probably feels as if they have now truly reached the highlands for the first time. But for me, who has seen Glen Coe and Rannoch Moor before, Glen Falloch is a nice (but certainly not spectacular) place at best. In hindsight I think that this is a downside of walking southwards. Coming from the south, you walk from a beautiful but relatively unspectacular starting point into the awesomeness of the highlands. But if you walk southwards, you leave it.

Here are some images that might give an impression of what the area looks like from the perspective of a walker. Read the captions for some more info on the pictures.

Rocky Waters. This is what the river looked like most of the time. 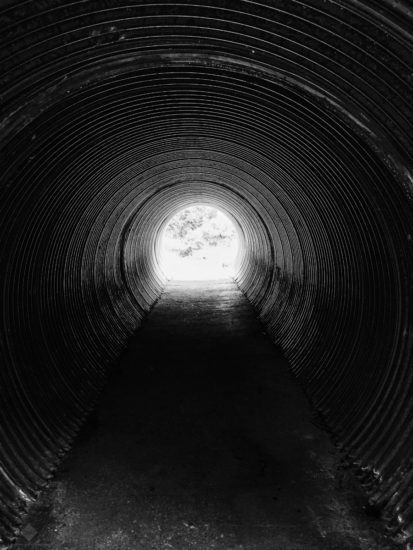 Sometimes I had to walk through tunnels like this. 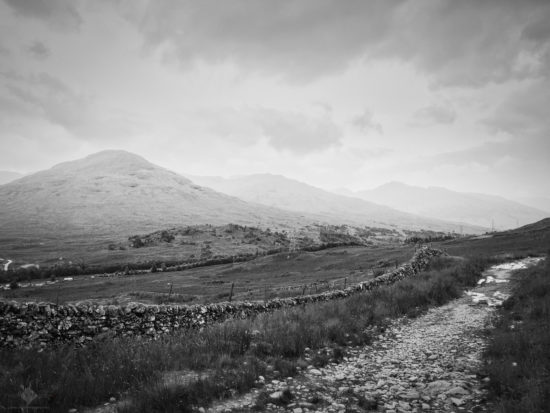 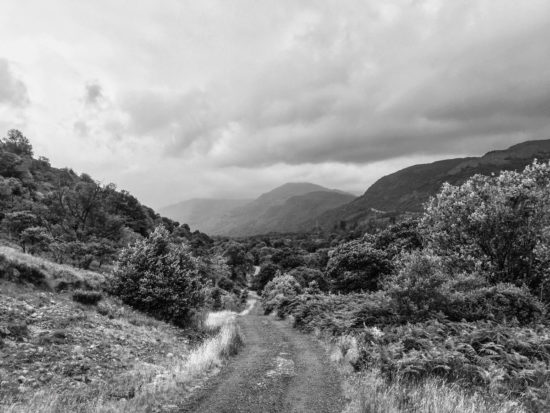 When I had reached the northern slopes of Ben Glas after about 11 or 12 miles (18km) I found that I had finally had it for this day. Unfortunately, though, I hadn’t reached my destination yet. But there was no way around it; I had to walk on for about 2-3 more miles. It was really a drag, mainly because my heel spur stricken feet hurt like hell. In the distance, I could see distant mountains in the pouring rain. This was where I would go on the next day.

What a gloomy prospect.

On the next day, I learned what it means to be soaked, met a walker who has survived a 3m fall unscathed, got wet to the bones, fell twice myself and learned to accept being wet as my new normal state of existence.

Did I mention that it rained all day?!