Another year has gone by, and before I move on to 2018, it’s time to look back at 2017 and review my photography and to choose my top ten photographs. This is the 4th time I did this exercise, and besides the fun of looking back and relive all those moments, I think it also has significant benefits for everybody who wants to take his or her photography to the next level. I can’t thank Martin Bailey enough for introducing me to this exercise. At the end of this blog post you can find a video slideshow with all the images mentioned in this post.

Firstly, having to choose only ten photographs from thousands of photographs and maybe even hundreds of candidates requires clear quality criteria. Why does this image work better, even if it isn’t quite as sharp as the other one? Why does that composition work, even though it doesn’t adhere to the rule of thirds. Is this photograph good enough for the top ten or is it just our personal attachment that fools us into believing it? Selecting the top ten out of thousands requires razor-sharp thinking and about these questions – and a few more. At the end of the exercise, those criteria will be more refined and have an impact on your work in the future.

In the past years, I have already written about my selection process in detail. So, to avoid redundancy, I will not describe this year’s process here. It hasn’t changed. Instead, I would like to write about another benefit the exercise brings and then give a little insight into the story behind it shot, e.g., the situation in the field or some technical explanations. Enjoy the read!

The other benefit I mentioned above has to do with getting away from individual images and instead examining my work as a whole. Have I started doing things differently regarding processing, composition, genre, or any other creative decision throughout the year? In short: Has my style developed or changed in any way. The tricky thing about style is that it happens unconsciously. It is what happens when you work without thinking about it, so there is some value in stopping now and then and reflect on the subconscious decisions of the past. Doing so can help you realize what it is that inspires and fascinates you and might lead you to begin future projects along those lines.

In my case, it has become evident that the amount of animal photos I have taken has dropped considerably in 2017. In fact, I haven’t been to a zoo for more than six months – and I haven’t missed it a bit. Instead, I have done more and more landscape and architectural work. In addition to that, my images have become more and more abstract, less descriptive. They are more about communicating and evoking emotions than showing how something looks. In fact, this development has already begun back in 2016 with my Echoes series, but I didn’t realize that it was the beginning of a broader development back then. I saw it as an extravagant abstract project.

But my work in 2017 continued to have an increasingly abstract approach, be it with the long exposure landscape work I did at the German North Sea Coast or in the Ruhr area (including my work at the Landscape Park Duisburg), or be it with my abstract architectural series „Deliberately Confusing.“ I don’t know for sure yet why I am pulled towards abstract photos with an unclear subject matter, but now that I have realized it’s there, I plan to make deliberately explore it.

With all of my top ten photographs being more or less mysterious and enigmatic on some level, I found it only apt to call this year’s collection „Enigmatic.“ Read on now to learn more about the first five of these top ten images.

This image is the second out of a series of portraits of a bald eagle. I took it at a falconry park in Bavaria. The bird was sitting on the ground and didn’t move much (except its head). I still regret not bringing my 150-600mm lens and my tripod with me. I hadn’t expected to do any wildlife photography in Bavaria, and since my 150-600 is quite a heavy beast, I had decided to leave it at home. Instead, I was forced to use my trusted Nikkor 70-300mm and shoot handheld.

The element of mystery in this shot is obviously the closed eye. The eagle’s haw with all its veins gives the world an almost otherworldly and slightly creepy appearance. Funny though, even though its eyes are closed in the image, the bird still gives me the feeling that it can see many more things than I. What it is it can, however, remains unknown. 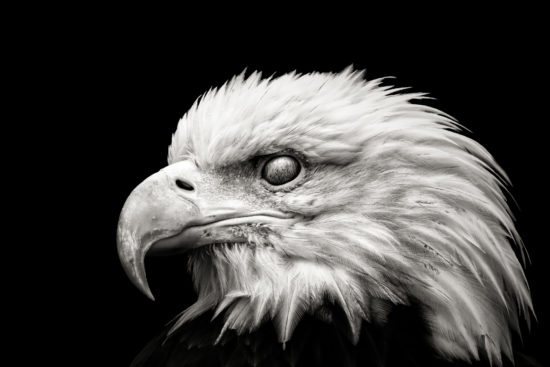 I took this photo of a Barbary macaque at the Apenheul zoo in the Netherlands, a zoo dedicated almost exclusively to all kinds of monkeys and apes. When I visited the park in August, it was packed with visitors. Getting a clear field of view was difficult, even with my tripod and my sizable 150-600mm lens which often intimidates other people. The fact that those little monkeys move quickly and rarely sit still for more than half a second didn’t make things easier.

This image shows the monkey apparently gnawing on its fingernails, deep in thought. The eyes, as always the essential element in a portrait, aren’t looking at the viewer but instead are staring absentmindedly into the distance. We will never know what is going on inside its head – which introduces the element of mystery to this image. 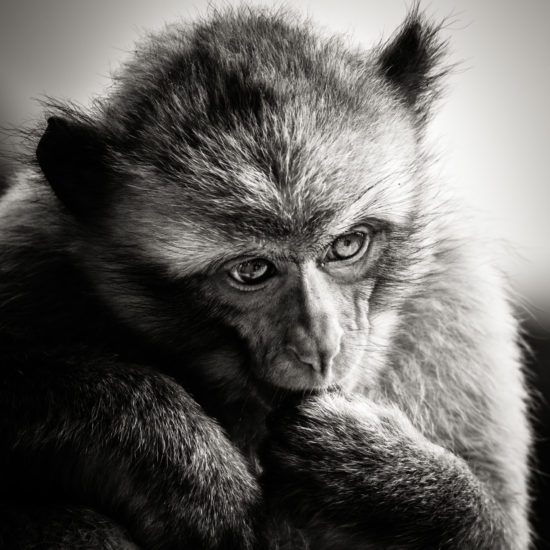 With all its detail, this photograph is the most descriptive one in the set. It was taken in Herten, Germany, at a disused coal mine. Parts of the compound are now used for exhibitions, events, or as a recreational area (including a beer garden) where you can take a walk in between the old buildings or climb the impressive former pithead stocks with its observatory, sundial, and impressive views.

I was on a photo walk with, Frank, a photo friend and coworker of mine. He was watching a model shoot nearby when I approached the shaft tower and explored it with my camera. I was trying to find angles and came up with this solution. When I was shooting this, I remember being quite upset about not owning an ultra-wide angle lens. Looking back now, however, I find that having to deal with the limitations of my 18mm lens on my APS-C camera made think more about the composition and might have ultimately helped me get a better shot. Sometimes, the easy solution isn’t the best.

In post-processing, I deliberately went for a dramatic sky and clipped shadows to give this image a slightly mysterious and foreboding appearance. An addition to this scratches on the steel, a bit of ruggedness and dirty and windows hint at the history of these place and the countless stories that will never be told again. 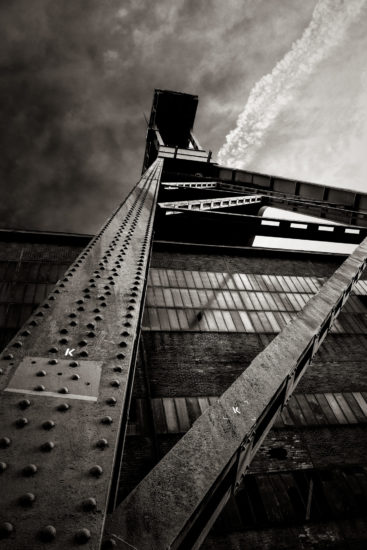 These two signs stand on the banks of the River Rhine in Duisburg, Germany. I had no idea what they mean when I took the picture, but I loved (and still do) the minimalism in the frame which is enhanced in post-processing by burning the upper edge.

As simple as the image is regarding its appearance, as mysterious it is regarding its subject matter – unless you happen to be knowledgeable in river navigation. The frequencies shown on the signs refer to marine VHF radio. I assume they mean that depending on the direction you go on the river from this point, you have to choose the appointed frequency for radio reception. 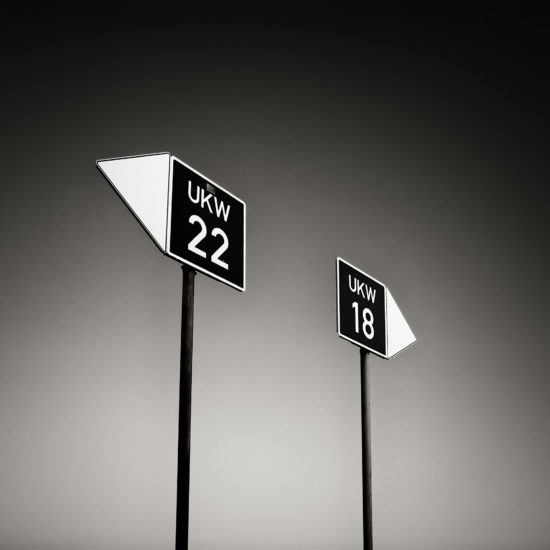 „One shot only. No multiple exposures. No Photoshop trickery.“ This is what I wrote about this image when I posted it on FlickR and in my blog post „Deliberately Confusing.“ In fact, the technical side of this photograph is as mysterious as its subject matter. Maybe the stone walls are telling stories from long ago, conjuring ghosts of the past. 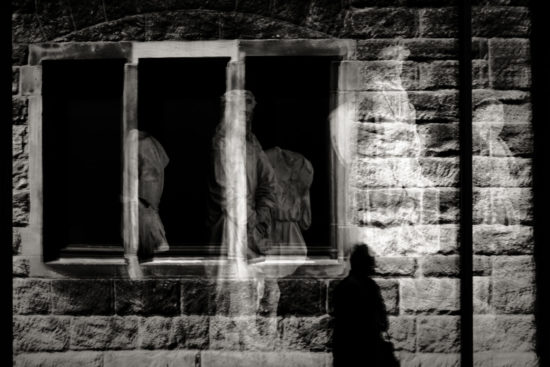 I have been asked quite often how I took this image and how I created this effect without using double exposure techniques in camera or Photoshop. The answer is surprisingly simple: I used a polarizer. Apparently, most viewers think that if I didn’t insert the statues into the frame in post-production, they must be reflections of some kind. But they are not. They are, in fact, behind a window which reflects a stone wall on the other side of the yard. Using the polarizer, I made the glass less transparent and more reflective. On top of that, another person walked into the frame while I was shooting (lucky me) and created the black shadow in the frame. The following image might illustrate the situation. 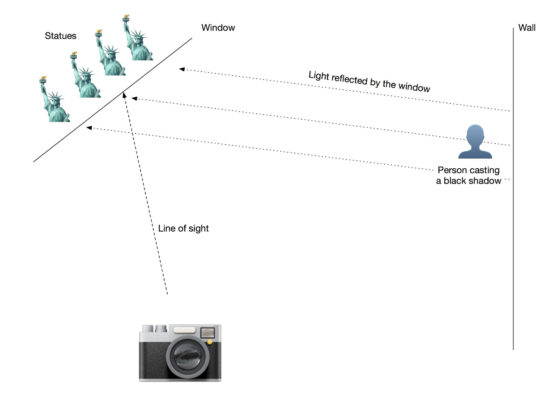 Ghosts – Situation in the field

End of part one

We have come to the end of the first part of this blog post. I hope you enjoyed it. Stay tuned for more images and stories next week in the second part. In the meantime, enjoy this video slideshow I put together, containing my top ten photos.