Perfectly composed minimalist long exposures, compositions which lead the eye and assist the viewer, pixel-perfect Photoshop image manipulations wherever you turn. Today’s world of photography often follows the same rules. In this post, I go against the grain and showcase work which is deliberately confusing. Enjoy the photographs below and the animated slideshow at the end of the article.

The great unifier – the web

When the Internet was new, and on the rise, artists and free thinkers applauded its success and welcomed it as a means of democratization of everything, including art. But while it surely has the potential to give every single a person a voice and the tools to become a creative and contributing part of whatever community he or she chooses, it also comes with a negative side effect only very few have foreseen. With the advent of the so-called influencers and the infiltration of the web by numerous business interests, the Internet has in many ways become the great unifier, defining and communicating trends which those who wish to be heard have to adapt to.

In photography, for instance, there are many mentors, trainers, professional photographers, educators, and masters, very often self-proclaimed, who are offering their educational products and their services. But most of them teach the same lore, the same rules, techniques, how to avoid the same mistakes, how to create the same perfect shot. They all say that it is important to know the rules of photography before you can break them and they are right. But only very few speak about the process of rule-breaking itself. This, to me, is a pity, because this is where creativity begins.

Instead, what happens is that the audience takes in all the knowledge and strives to implement it. People start working along the same lines. And they start judging and commenting on other people’s work according to those lines, too, thus creating peer pressure which again reinforces the rules of photography.

One of the rules that can be learned everywhere is that simplicity and clarity make a good photograph. An image has to have an easily recognizable main subject, which is supported by the composition, any possible distractions removed or minimized. How very convenient for the viewer who can enjoy and understand such photographs with a quick glance and without any effort – before he can move on to the next image in the web’s endless photostreams with a flick of his finger on his touchscreen.

This is not to say that all work out there is uniform, uncreative, boring and low quality. On the contrary. There are some artists out there who create outstanding work within the boundaries of the general rules of photography. Work which is so impactful that it makes us halt and look at it a little longer. Nor am I saying that the rules as such are false, unnecessary or not useful. I guess what I am trying to do is make a case for little more courage to be more creative, extend the boundaries of these rules a little and try a different approach from time to time – as I did with the images in this blog post.

In this post, I try to go against the grain a bit. The images here are not simple, but complex, not clear, but mysterious, not easily digested but difficult to
decode and understand. Understanding and appreciating them takes time and can not be done at a glance as they float by in the photo stream of your choice. They are deliberately confusing, an invitation to explore and decode them.

With all of this being said, the photos are also quite experimental. Some of them work better than others. But creating them was a worthwhile experience.

One way to add complexity and thus mystery and confusion to an image is tight crop which decontextualizes an image, making it harder to guess what the viewer is actually seeing. The image below, for example, only gives away enough to see that it is some architectural photograph, but gives no indication whatsoever on what kind of building it is. While it appears to be deceptively simple in composition, it reveals lots of detail on closer inspection, none of which, however, helps to clear up the unanswered questions. 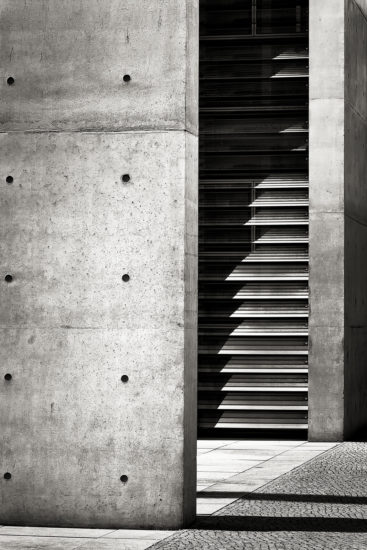 Holes, Walls, And Shadows. Taken at the governmental district of Berlin.

The following shot is another example of the same concept. It is based on the idea of creating an image which is mainly comprised of multiple triangles. 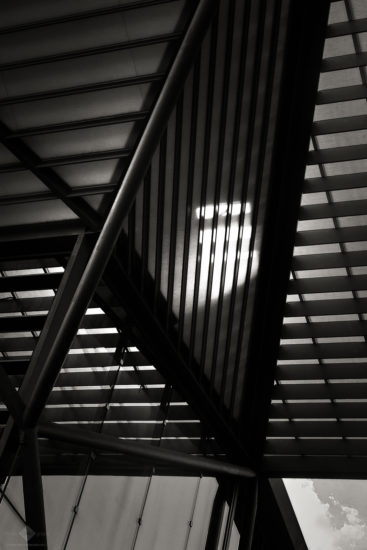 Triangles #5. It shows a part of a projecting roof construction, taken at the Jahrhunderthalle in Bochum, Germany.

In the following shot, the crop removes the relationship between the pillar in the foreground and the abstract shapes in the background. The pillar appears to have a function in the image as many background elements seem to relate to it. And yet, it is clearly separated from the background. 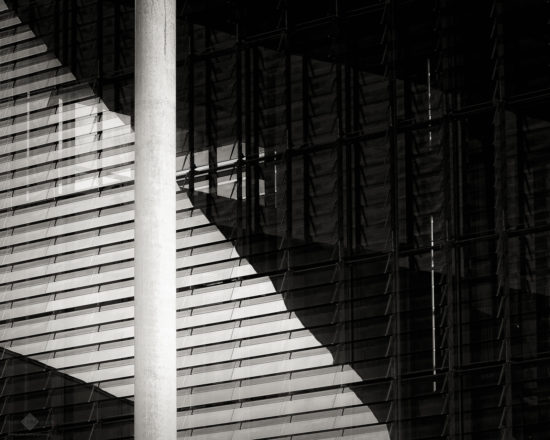 White Pillar Taken at the governmental district of Berlin.

In the next photo, I chose a very extreme side view on a building with a protruding glass foyer. In addition to the element of decontextualization, the reflections on the windows add an extra element of confusion because their origins cannot be seen. The tree inside the foyer seems wonderfully out of place, too. 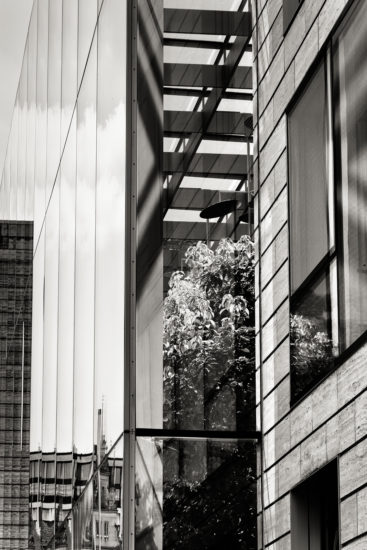 Tree in A Foyer. Taken in Münster, Germany.

Using the reflections on glass or water is a classic concept of increasing the interestingness of an image. Here, I use them to combine disparate elements, thus creating a confusing paradox. Below, you will find three variations of the same photograph, each demonstrating the concept outlined above. 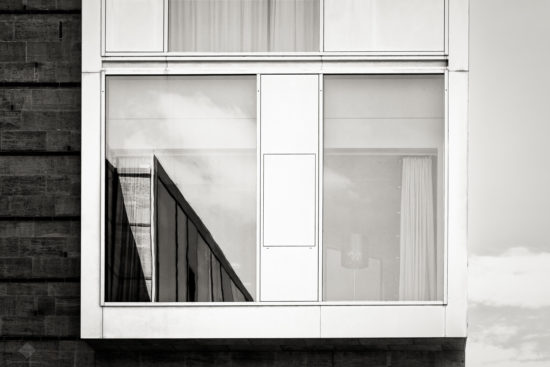 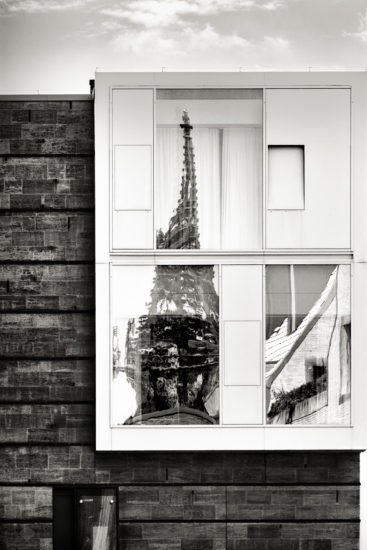 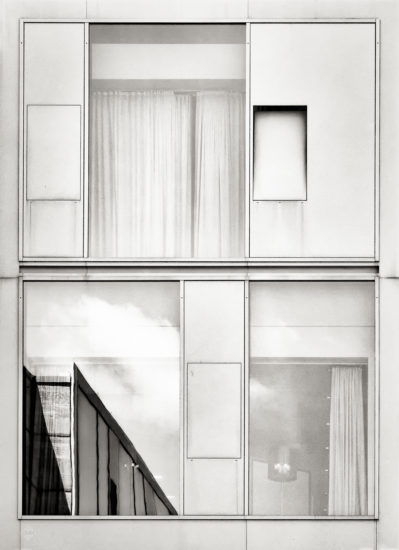 In the following photograph, the typography clearly gives away, that the image shows a movie theater. And yet, the reflection of the trees creates a visual conflict which takes a few moments to come to terms with. 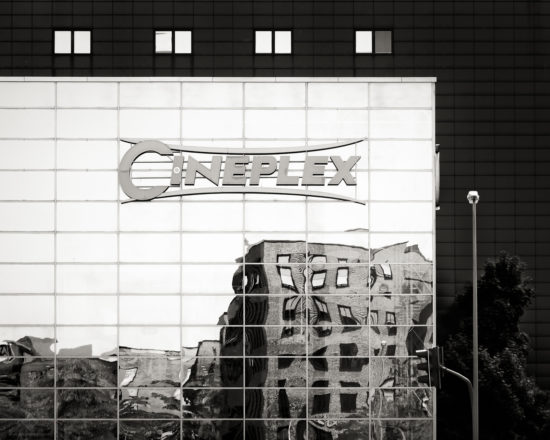 The next three images demonstrate the idea of adding mystery and confusion using various techniques in Photoshop, like motion blur effects, textures, or border effects. 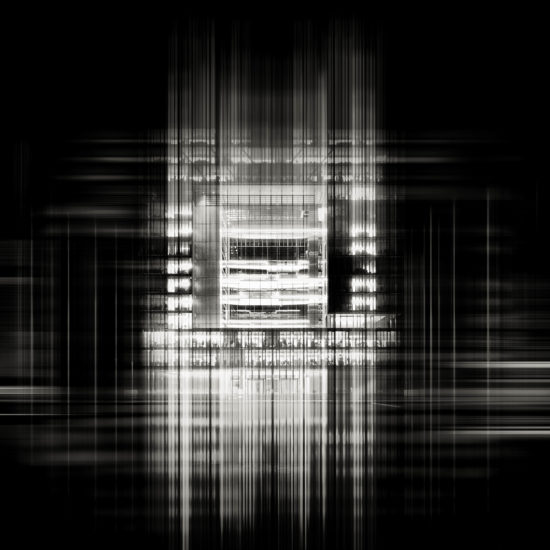 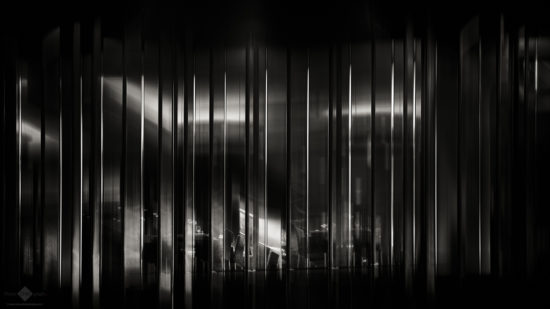 Child on The Run

Using a polarizer can be very useful for controlling the transparency of windows. This way, the reflection in the window and what is behind it can be blended nicely, making it very difficult to discern where transparency ends, and reflections begin. The following photograph play with this concept. 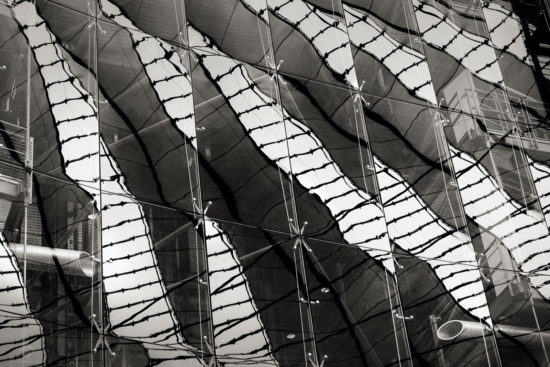 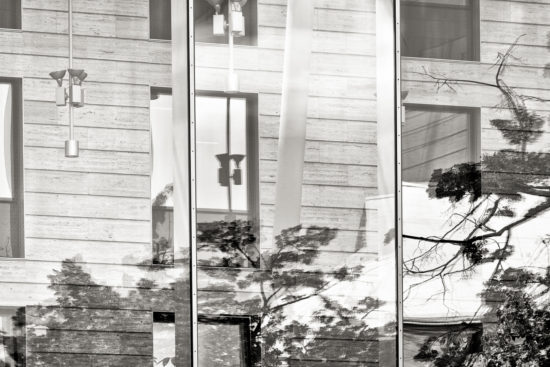 Tree outside a foyer 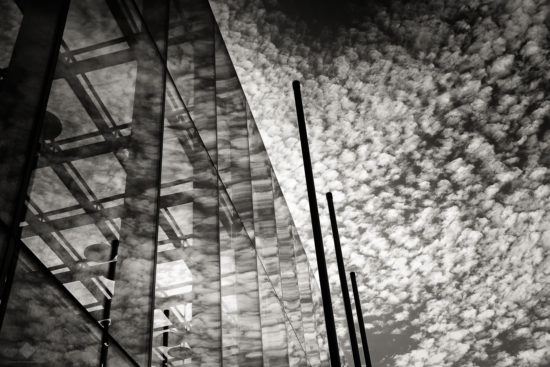 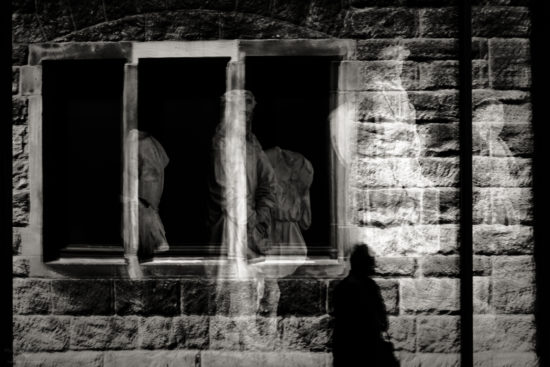 Ghosts. One shot only. No multiple exposures. No Photoshop trickery. 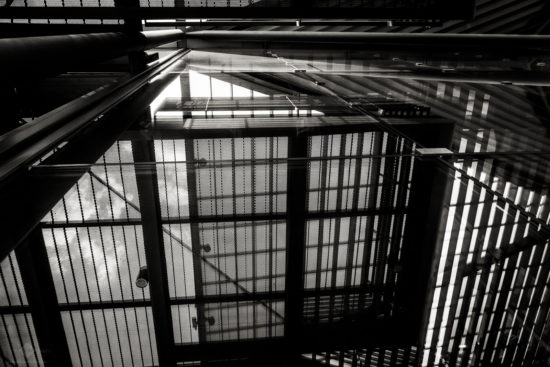 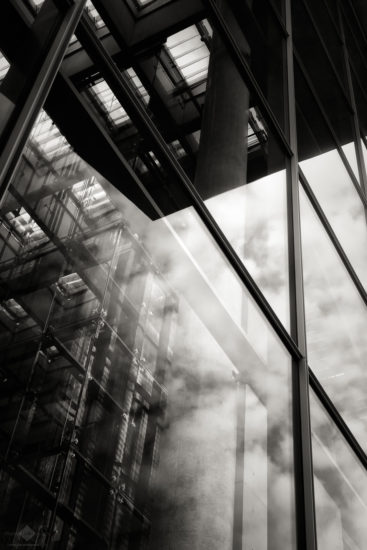 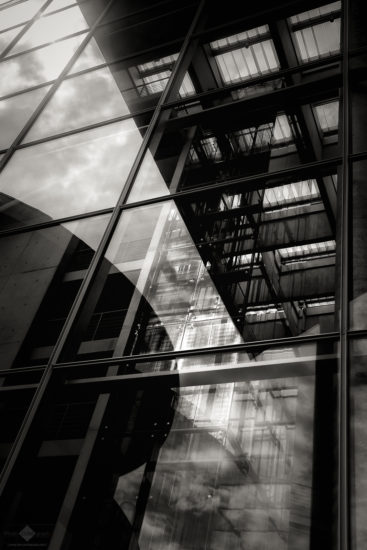 Another way of messing with reflections is looking for elements which interfere with them. I was lucky to find a building in Munich, Germany, which did just that. 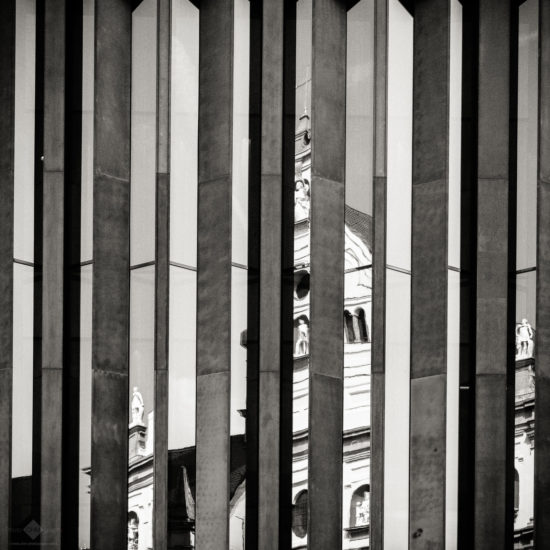 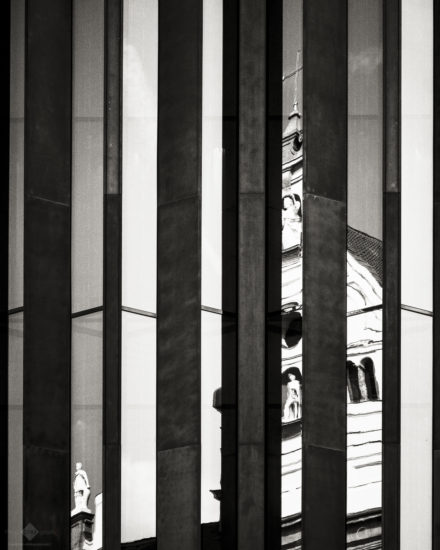 In the following image, I tried to confuse the viewer using the sheer mass of visual elements with little or no apparent composition. 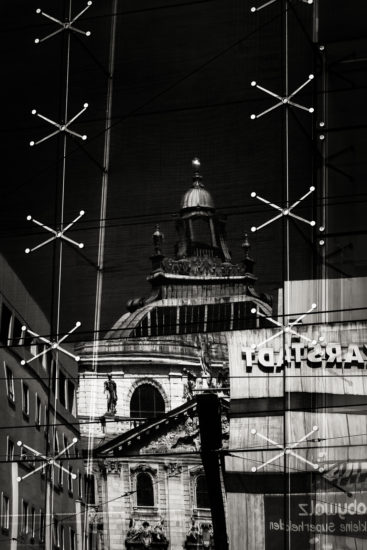 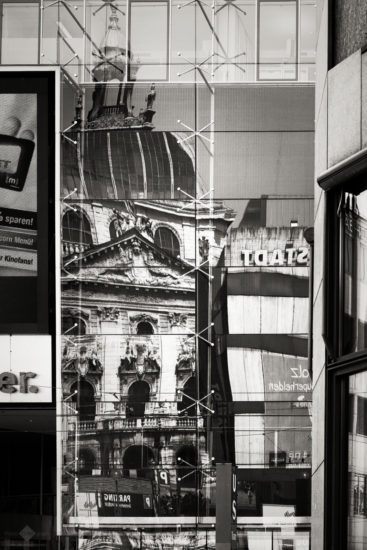 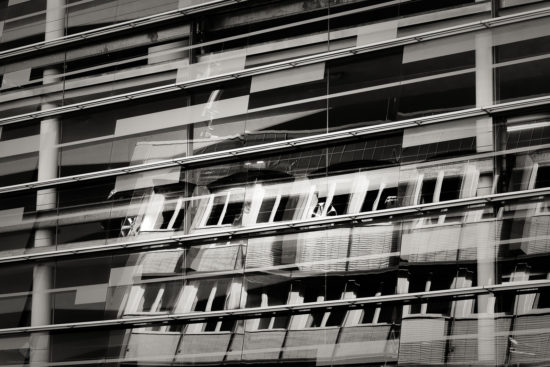 Car Par Reflection. Look closely, and you’ll find a set of wheels which give away that this is really a car park. 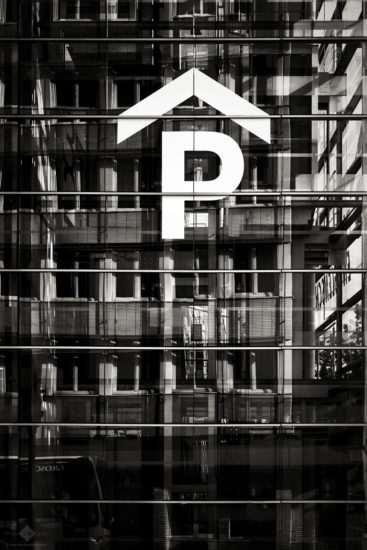 Getting rid of even the useful rules of creativity can be a refreshing experience because it opens up countless new options. Creating photographs again feels like an open and playful endeavor. Sure, many results you get will not work for many people. But at least you had a great time creating them. I, for one, surely had.

For further examples of confusing complexity and abstraction, check out the Visual Arts portfolio of Sandra Sachsenhauer – fantastic work!

Interesting things to think about here, Christian, thanks for sharing your theories!

Thanks for taking the time to read this stuff. I am glad you got something out of it.

Excellent and inspiring post, Christian. Seeing differently is a great way to diving into real artistry and imaginative work.

Thank you, Jean Michel. I hope you are all right and your Shades of Grey Magazine is doing well.

Thanks for your feedback, Jamuna. I love it when my work is meaningful to people.

Clearly confusing and fascinating. I’ll keep checking in for a great perspective adjustment! Thank you for your effort here.

Thank you, Mark. Much appreciated.

[…] my work at the Landscape Park Duisburg), or be it with my abstract architectural series „Deliberately Confusing.“ I don’t know for sure yet why I am pulled towards abstract photos with an unclear subject […]

This is very interesting. thank you for directing me here. As you can see my photography is more point and hope, although you have inspired me to spend a little more time with my creativity.

I know what you mean. Much of my work would never have been completed without a good deal of hope. Hope is what helps us overcome obstacles, isn’t it?

Yes, you are so right.

[…] which was printed on the window for reasons unknown to me. Therefore, it is much closer to my “Deliberately Confusing” series than this series of abstract architectural photographs. Nevertheless, it was too tempting to […]