Day 1: Ruins, horses and mysterious buildings – Getting from Wallsend to Newcastle

It’s a strange feeling when you make the first steps of a very long walk. Excitement, of course, the thrill of anticipation, surely. But also a bit of uncertainty. After all, I was about going to places I have never seen before. All of a sudden the realization kicked in that this trip wasn’t only about walking and cool photo opportunities, but also about making decisions. And each one of them could cause a problem or even mean the end of my trip. This prospect wasn’t exactly frightening because I knew I would never be far away from the civilized world, but the awareness of this challenge certainly added to my excitement.

Hadrian Estates For Rent – Roman names are all over the place along the track.

As you can see in the picture, I had quite a distance to cover on the first day. But I wasn’t aware of it, so I took my time which wasn’t the wisest choice. My first stop was Segedunum, the ruins of the first sizeable Roman fort along the trail. In the middle of an industrial area, the outlines of the walls have been dug out. There are some ancient stones left but all in all, it is not an overly exciting place. The most interesting building is the modern day museum tower. If you climb upstairs, you get a bird’s eye view of the fort, along with some explanations which wall outline once was which building. The museum itself doesn’t feature many original exhibits. Most of them are replicas. But there was one reason why going to Segedunum was worth the time. In the museum, I bought the Hadrian’s Wall passport, a document that you would get stamped in seven different locations along the track as a proof that you really did it. I got the first stamp right there at Segedunum. The second interesting thing to see at the museum was the reconstruction of the wall as it might have looked in its heyday. To think that the Romans built this kind of wall along a track of more than 115km is a pretty amazing. This photo really doesn’t do the wall justice. 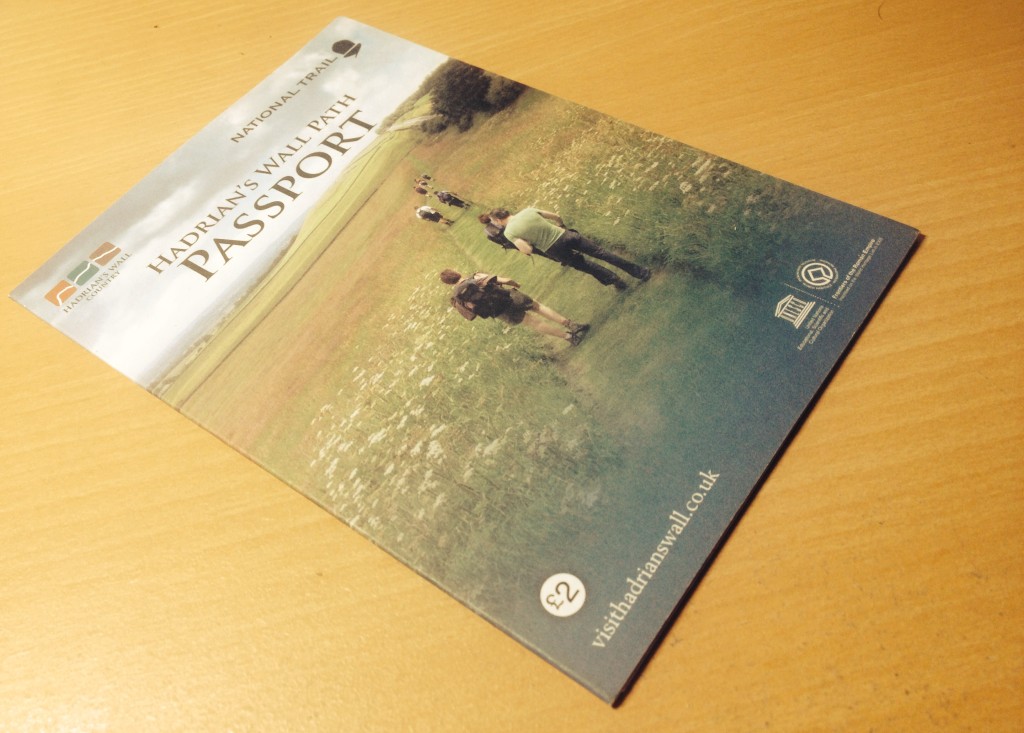 Getting from Wallsend to Newcastle

After having seen the museum, I finally started walking Hadrian’s Way itself. But finding its starting point wasn’t easy because some parts of the area were blocked by construction site fences. A friendly local took me to the track. It shouldn’t be the last time that I was impressed by the friendliness and helpfulness of the locals. However, it was almost 11:30 AM when I finally started got on Hadrian’s Way.

I had read about the first leg of the Hadrian’s Way (as the Hadrian’s Wall Path is called in Newcastle) that it isn’t exactly the most rewarding one. The first stretch of the path leads to an industrial area, so my expectations were low. But they had done an excellent job hiding all the ugliness behind thick hedges, and the sound of the seagulls helped a bit to sweeten the sound of traffic and industry. The track was solid and even tarmac, so it was easy to walk. All in all the experience wasn’t as unpleasant as I had expected. Two things caught my attention:
The first one was a horse. If you look at the photo, it is not apparent at all that it was grazing in the middle of an industrial area. But the green idyll ended right behind that hedge. It was the first glimpse of rural England in the middle of industrial Newcastle.

The second one was a mysterious construction that I found. I have no idea what it is and what it is used for. At first, I thought that it was some kind of unfinished construction site, but then, later on, I saw two identical structures from a distance with no cranes nearby, so I am not really sure that it was indeed unfinished. If you have any idea of the purpose of this thing, please drop me a line.

What the heck is this?

The path walk got really pleasant when the way reached the banks of River Tyne. Clouds had broken up, and the weather was sunny and warm. And still, there were the sounds of seagulls in the air. After every bend and turn of the river, I got a view of what lay ahead of me. Anticipation drove me forward.

Traces of the morning rain 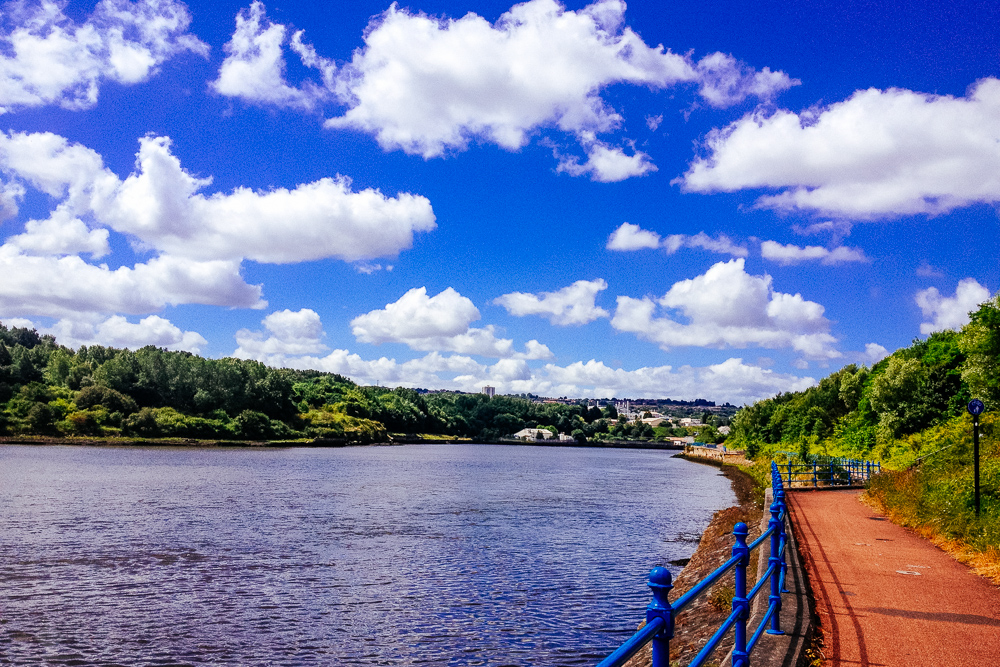 After about 80 minutes I reached St. Peter’s Quay, a lovely little harbor with quite an inviting bench. I had walked this stretch of the path before in Cyberspace using Google Street View with my kids eagerly watching what I was doing, so getting brought up some pleasant memories. 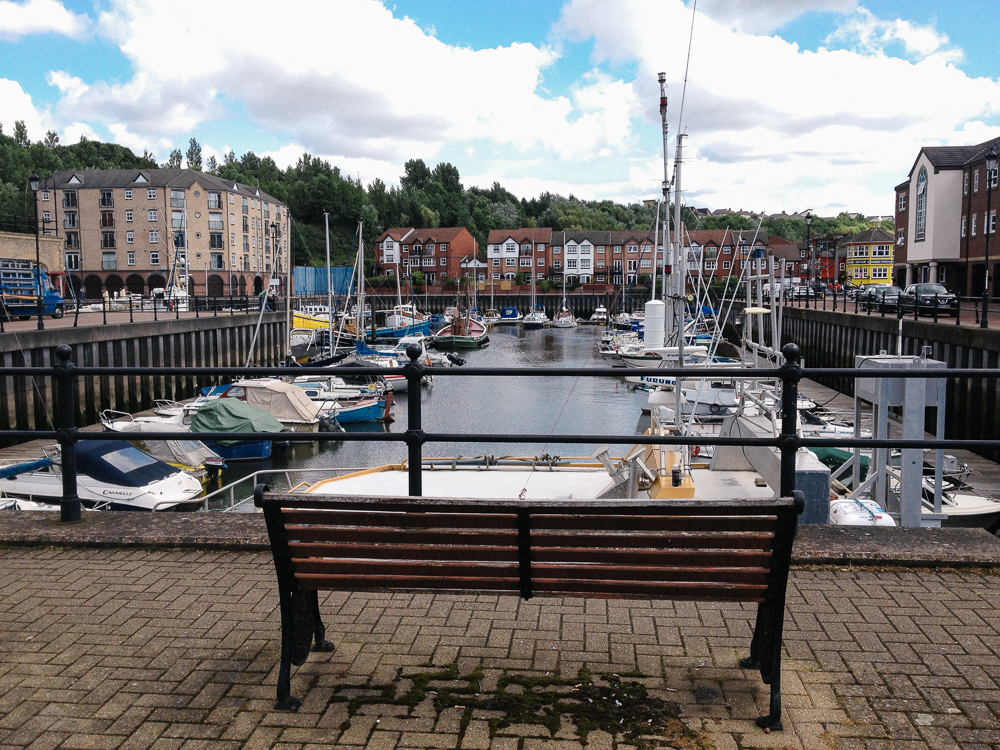 What the heck is this?

In the next part of this travel report, you will see the seven bridges of Newcastle. Stay tuned.