If there is one thing the UK is notorious for, then it is its wet weather. This is, of course, a prejudice (at least to some degree) and so far I had indeed been fortunate on my trip as far as the weather was concerned. But on day 4, the UK truly lived up to its reputation and left me soaking wet. Twice. And I mean not “wet” by your standards. I mean wet by UK standards. How do you know if it is wet in the UK? Well, read on, I’ll tell you at the end of this post.

As a photographer, wet weather is not exactly ideally suited for good landscape photographs. That is, however, unless you let go of certain preconceptions of what a beautiful landscape photograph should look like (vibrant colors, beautiful blue sky with a few white clouds, or maybe a beautiful sunset at sea with some decorative rocks in the foreground and a beautiful color gradient in the sky). If you open up to an alternative vision, then you’ll quickly find that there is beauty in every kind of landscape and every kind of weather. And yes, there can be beauty in barren landscapes under a cloudy sky with little color. This is the kind of scene that I got to see on this day. And this is what is what I try to accentuate in my images.

I started out at about 9 AM from the Bridge House Bed & Breakfast which by the way was the best accommodation I had on the whole trip. I headed straight north to get to the Hadrian’s Wall Path again. The rain was only a weak drizzle at that time. There was fog hanging over the tops of the hills, so intense that it looked like low hanging clouds. After crossing the B6318, I could see the hills of Cawfield Quarry with some cattle grazing on their slopes. It was quite and peaceful, and I felt compelled to take some photos.
Unfortunately, the rain became stronger and forced me to put my camera away in my backpack. There’s a small lake or large pond (whichever way you want to look at it), and some people were preparing for some rowing session. People around here are apparently used to the weather.

After some time I sought shelter underneath a large tree, but this helped little to protect me from the ever-increasing rain. So I bit the bullet and went on. My rain jacket could only take so much rain, then it just failed. A hard shell would have been necessary, but I didn’t have one. After an hour the rain got weaker and finally stopped altogether. By that time I had reached the Walltown Crags where I had a break and a snack. 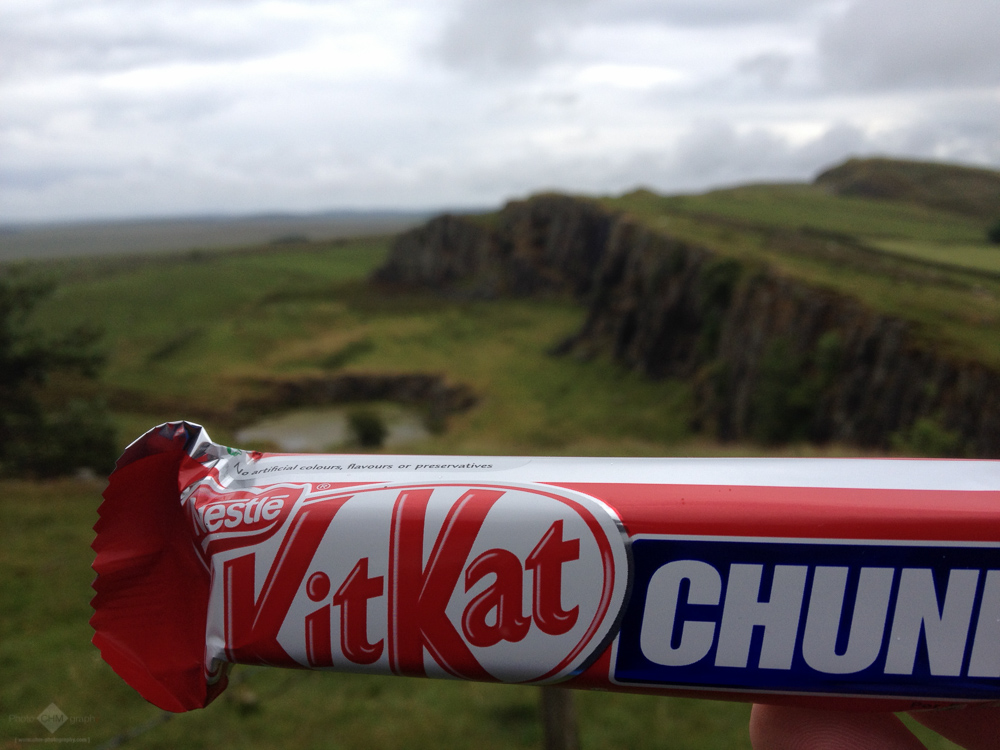 It is here while I was sending this exact photo (see above) home that Jerry and his wife came along whom I had met on the first day of my walk. We decided to walk together for a while and had a little talk about the way behind and ahead of us. They were kind enough to take a photo of me with my camera. But I will certainly not post it here, so please manage your expectations accordingly.

Our ways separated after a while because they wanted to have a break. The sun was shining now, and my wet clothes were dry again in no time. I passed the ruins of Thirlwall Castle and soon was out in the open fields again. In the distance, the hills of Lake District began to appear on the horizon.

By this time, I had left the toughest stretch of my walk behind me with all its steep climbs and descents along the numerous crags and gaps. So I was looking forward to enjoying an easy walk for the rest of the day. But it didn’t happen because I had forgotten Harrow Scar. As if to say goodbye with one final but fatal blow, Hadrian’s Wall threw one last ascent at me, and it was the steepest and longest of them all. After I had mastered it, I felt completely destroyed and needed a not too short break. Jerry and his wife caught up and went on, but I didn’t care.

I soon passed Birdoswald, once a Roman Fort and now a museum and tourist trap, but went straight on. I got the chance of taking some beautiful landscape photos, many of which had to do with lonely trees and gorgeous mountains of clouds that were enormously towering above the hills.
Somewhere along the way, I met the GPS walker from day one again. They took another picture of me with my camera. Unfortunately though, this time I forgot to pick up my tripod and left it there leaning against a wall. About 20 minutes later I realized that I had forgotten it, so I had to backtrack and fetch it. Nobody had taken it away. This delay would prove fatal later on because it kept me from arriving at this night’s accommodation before the next heavy rain started. Again, I took shelter underneath a huge tree, but after only 5 minutes the rain just came dripping through. So I just went on, accepting my fate and relying on my rucksack that fortunately features a rain cover.

When I arrived at my accommodation, I again was soaking wet. Really wet. The rain had even found a way between my backpack and its rain cover so that even the pack was wet. Fortunately, none of my equipment was damaged. The landlady was kindly offering to put my wet clothes in the dryer over night. I had dinner with the other guests of the b&b in a dedicated dining room, but I didn’t say much. I was just too tired to think or let alone speak English. Later, however, I watched the world championship football match of Brazil versus Germany on TV together with a British football fan in the common room. Germany beat Brazil 7:1 – we couldn’t believe our eyes!

And now: How do you know when it’s really wet in the UK? Well, you can’t tell a wet stepping stone apart from a cow pat anymore. And now guess how I found out…. 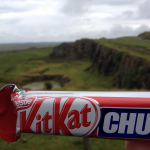 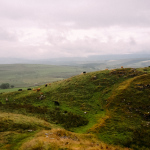 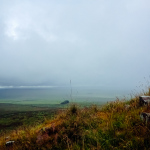 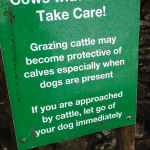 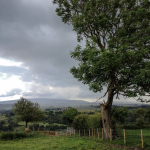